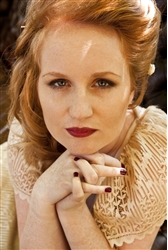 Sam de la Haye is a London based singer/songwriter whose blues-inspired, soaring vocals combined with intelligent lyrics and neat piano driven tunes have seen her described as “Beautiful” by Neil Sedaka and has had her gain the attention of Guitarist Steve Cropper. Originally Born in Jersey C.I, Her ability to both evoke emotive response and entertain thoroughly has wooed crowds on tours of America and Ireland as easily as it has in local London venues.

Sam’s distinctive sound evolved through her childhood years in Jersey, into her BA in contemporary music and two year stint at the prestigious BRIT school. This solid foundation allowed Sam to develop organically, while maintaining and utilizing the highest reaches of technical proficiency.

Late last year, Ray Davies asked Sam to sing/narrate a children’s play that was commissioned by Grazdale Arts for The Great British Festival. Over August Sam rehearsed and working closely with Ray until the performance at The South Bank. Ray also personally selected her to support Guillemots for Royal Festival Hall Meltdown Festival and she also appeared as a special guest along side Eddie Reader and Robyn Hitchcock for the Kast Off Kinks performance at the Purcell Room.

Sam keeps her musical independence working as a piano/vocalist for some of London’s top hotels including the newly opened Savoy, honing her piano and vocals by performing every night Sam’s debut album is the result of an organic development. Fresh off the press, her album takes in a multitude of influences ranging from The Fleetwood Mac blues era to Kate Bush, and on to more contemporary artists like Eva Cassidy, Adele and Tori Amos.