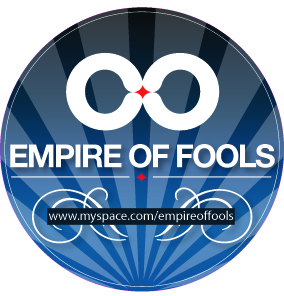 Empire of fools are a honest melodic rock band, these are the first words coming to my mind when I listened to the first track of Mac Ten’s Album, the EP out on 30th March by this brand new band born from the collaboration of Mark Pascall and Steve Cobbin.

It’s the kind of record passing like a Londoner day, with sunny peaks and cloudy breaks. The sound is massive, the band seems already mature, run in by the countless gigs performed throughout last year, critics are already talking about their live performance during festivals, so they are a very enjoyable band.

Talking about the tracks on the record, they are made of powerful melodies arranged with a stylish 90s rock attitude and massive riffs, like in “Lost It All”, played after the manner of Chris Cornell’s bands.

This is a style put a bit aside in the last years,  apart from the Soundgarden reunion, and these guys make a comeback to that kind of sound with a fine, accurate work, in which they balance well the mellowness of singer’s vocals and the guitars, leaving a scratch on each track.

Concerning the guitars, they are robust but clear, while Mark’s vocals are enriched by deep backing vocals.

The going gets tough with “Down To Earth”, where the guitar is stronger and sounds like a backing vocal for the lead singer reminding the good times of Velvet Revolver or Stone Temple Pilots.

They give just  a while to take a breath with “Ain’t got your gun” and then they add fuel to fire with “All night long”, a stadium rock anthem made to be sung-along by crowds, it’s clear that these guys want to reach the top. The track gives an instrumental variation that touch upon blues just for a moment, to come back immediately to a distorted guitar.

“Better day” lets itself go to a tribute to Incubus, I don’t know if it’s something done with awareness, because you know, some melodies keep buzzing around our head unconsciously,  but I like it and leaves me with a good taste in my mouth.