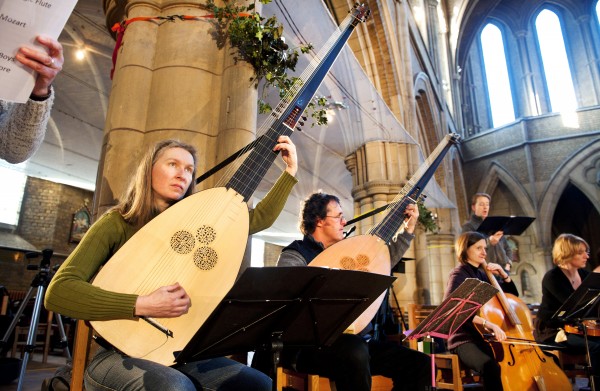 Written during the time of Elizabeth I and re-imagined for the Diamond Jubilee year of Elizabeth II, these are the most precious words ever written about love. Performed on instruments from the early 17th century, played by the cream of the world’s period instrument specialists, conceived with immense passion, commitment and integrity, Shakespeare: The Sonnets was recorded in London over the last 6 months.

Fresh from his success of recording an outsize Renaissance mass for a massive 40 parts that had not been heard for 400 years (and winning a Gramophone Album of the Year Award in the process), Robert Hollingworth, director of vocal ensemble I Fagiolini (also a judge on the UK’s Choir of the Year and involved in a number of films) was looking for a new challenge. To a specialist of the Renaissance period, Shakespeare’s sonnets are an intriguing challenge: the most romantic and personal poems ever written but rarely set to music.

All the lyrics are Shakespeare’s own and no additions made, although occasionally lines have been moved around to fit the contemporary song structures. Within this, the meaning is never altered and the emotional content of the sonnets is always sustained. What is amazing is how modern some of Shakespeare’s language is: ‘Blind Fool Love’, or the ‘blues’ sonnet ‘No Longer Mourn’ – or the final track, ‘Love is a Babe’.

Singers from all over the UK perform on the album, but finding players of these rare and ancient instruments ought to have been incredibly difficult. In actual fact, the UK is the world leader in modern performers on these recreated ‘period’ instruments, and experts in playing in period style.

For example, Erin Headley plays the lirone – a 13 string cello-type which is so difficult to play that it has not been heard for hundreds of years. In fact Erin is one of only a handful of professional lirone players in the whole world. Also Lynda Sayce, who played lutes, Renaissance guitars and theorbo is the lead lutenist and a world authority on the instrument. Her theorbo (a type of giant Lute with a very long neck) is a copy of one originally made in Venice in 1608 and now housed in the Royal College of Music, London. It has strings lengths of over 170cm and a massive 2 metre neck!

The originals of these instruments are in museums and often unplayable, so modern replicas are now handmade to order by makers who have rediscovered this ancient art. A harpsichord and virginals can be worth £20,000 each: lutes, harps and theorbos £10,000 each. All the instruments benefit from stable temperatures with no air conditioning, often problematic in modern life.

However the important feature of this project is its blend of early instruments and playing styles with modern recording techniques and the very modern groove. Percussion is played by famed drummer Geoff Dugmore who can usually be found playing with Robbie Williams, Rod Stewart and Tina Turner, as well as helping out modern day X Factor winners like Matt Cardle.