Young Hines – Give Me My Change 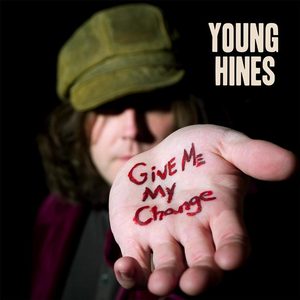 It’s a bit of a strange one is Give Me My Change by Young Hines. It’s one of those albums with lots of very likeable individual tracks, but without a consistent sound. Consequently, it lacks a sense of identity. You’ll remember it as a series of moments, as a supposed to a coherent collection of songs that add up to a whole greater than the sum of its parts.
For example, why does the album open with a minute long blues track, when this bears virtually no relation to the musical style of the rest of the album? That’s not to say it isn’t a good song, but the lack of consistency has the end result of making the album a bit tiresome. There is an immediate genre switch for the title track Give Me My Change, a fairly catchy alternative rock number with a stomping beat and some evocative riffs. Don’t Break My Fall is a lighter number, more pop-like with some decent sentimental harmonies and attractive falsetto vocals.
This leads into I Ask This of You, another pop track, quite nineties-sounding with its electronically altered lead vocal and a repetitive backing riff sung in close harmony. It also has a particularly effective end section, which gradually ebbs away texture by texture, till we’re just left with the riff repeating on and on by itself.
Time for another change of pace after this – You Keep Me Going features some more close harmonies, but is much lighter in style, and to be honest, somewhat bland and forgettable. No One Knows goes for minor, darker riffs and harmonies, but still lacks the invention of the first few tracks of the album. Then suddenly we get a country sounding track with Just Say No (Sometimes,) which is very catchy and well-realised – contrasting textures pull off that trick of making a song that is essentially fairly repetitive seem fresh and inventive throughout. There’s a partial return to the chain-gang sound of the start of the album in Hold You and Scold You, thanks to its deadbeat march-like beat and repetitive, gloomy harmonies. Rainy Day sounds like it’s been influenced by Lennon’s solo stuff. It has a folky guitar sound, more close harmonies and an imaginative, well-structured harmonic scheme, all combining to produce what is possibly the best track on the album. After this, Better Things proves somewhat lacklustre with its sentimental pop clichés.
The final three tracks do nothing to tie down the album’s identity. Can’t Explode is a very likeable grunge influenced number that opts for a far heavier sound than found anywhere else on the album. This is followed by acoustic folky song Lost in the Mix and light-hearted Beatles-esque pop track Forever Young, replete with honky-tonk piano and brass accompaniment.
I really like some of the songs on this album, but stylistically it’s all over the place and sometimes sounds a bit dated. Nethertheless, that’s not to deny the talent and potential of the talented Young Hines, and it’s also true to say that as a whole the album features more hits than misses.