Swimming – ‘All Things Made New (Stand)’ 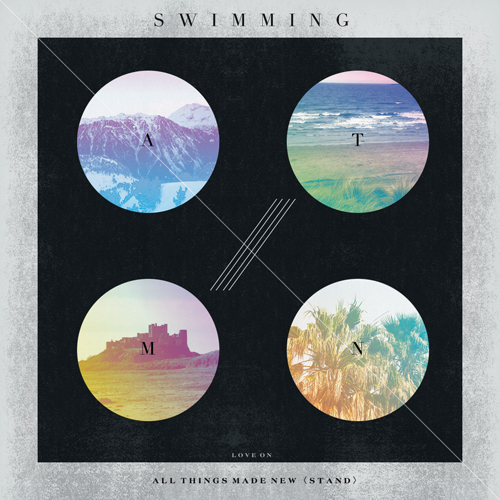 Formed in Nottingham, England in 2004, Swimming is a five-piece art-rock band that is currently signed to Tummy Touch Records. They are made up of singer and guitarist John Sampson, Brother Peter Sampson aka The Petebox on drums and vocals, Joff Spittlehouse (guitars), Blake Pearson (bass) and most recently Sam Potter (samplers / keyboards)

Swimming will return with a new double-A-sided single this June. The beautiful ‘I Do (Come True)’ / ‘All Things Made New (Stand)’ will see a release on June 11 via Tummy Touch, and is taken from the band’s sophomore album, ‘Ecstatics International’. The song “I do (come true) is a flourishing, love song, filled by waves of guitars, playful keys and lead singer’s animated falsetto. Which is easy to listen to and has a very powerful chorus which sounds very futuristic which matches the theme of the video which presents a beach with an astronaut of some kind. To contrast this futuristic love song is ‘All Things Made New (Stand)’ which is an upbeat and euphoric piece of unique-pop, mixing tempos and textures which seems to give a very happy feel with the words “we all stand together” showing togetherness is one of the genres throughout the song. It’s very different to the heart retching futuristic love song of “I do (Come True”.

Swimming’s attractive, different and eclectic wash of sounds earned them comparisons with almost a hundred different artists across their two acclaimed albums. Swimming is fast earning a reputation for their binaural live shows, which were described by Drowned in Sound as a “largely experimental, highly innovative and beautiful visual and aural experience.” The band has collaborated with Dallas Simpson which allowed the audience and the band to break from traditional live shows.