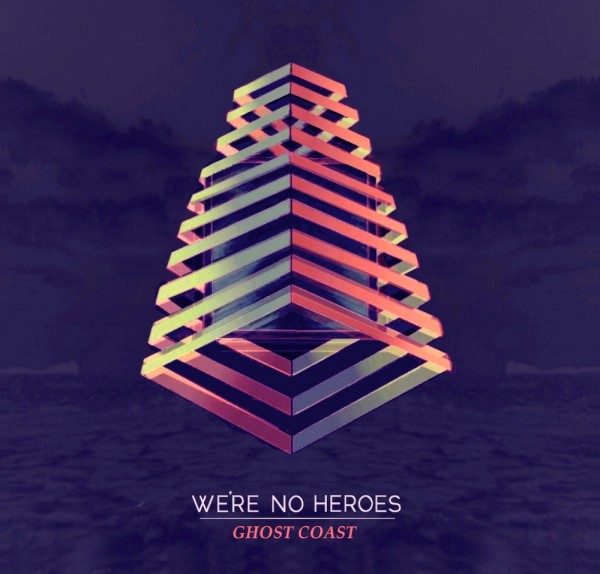 Homogeneity has always been, and always will be, for better or worse, like a symbiotic parasite to the music industry. So the refreshing thing I can say about Welsh trio We’re No Heroes is that they are different. And not in a self-satisfied way, which, along with the advent of Web 2.0 and social media, coupled with an indie fascination with an ironic aesthetic that borders on the absurd, seems to permeate that underground sound that is finding ever-new channels of exposure. No, the Cardiff group are modest, harking back to a time not too long ago – before our times, perhaps – but a time that seems somehow less pretentious. So their two newest offerings, Ghost Coast and Aerials, are certainly a casual wandering from the usual scenery.
Ghost Coast rumbles in with promising atavism, drawing you into a new-wave midnight sojourn, populated by sparse staccato guitars and thumping bass. My problem, however, is that the whole thing feels somehow anti-climactic; the thundering intro generates a dynamism that unfortunately lies latent, never being fully expended, instead receding into misty lackadaisical swooning vocal lines on a bed of thick bass and tribal drumming. Now, this is no bad thing – true to their 80’s new-wave roots, the track remains subdued, but never tiresome; it pulses with a hidden, haunting funk, sounding much like a moody brother to the sunnier Irish breakaways Two Door Cinema Club, but it makes no demands. An admirable quality for a track, Ghost Coast is, though passive and none too-stellar, undeniably a fun and enjoyable low-key affair.
Aerials presents new, more obfuscating elements. Gone is the homely choral vocal camaraderie, replaced with digitized, math-rock snarl. The uncomplicated, evocative tone is starkly done away with in favour of an amusical barrage of binary, as de-trebled drums pound their way in. While certainly a very promising start when one is seeking respite from homogeneity, this energy again falls short as the angular opening seeps into a familiar bassline and swimming verse. However, all of the things to love about Ghost Coast are here too; the pounding beat and rhythmically smooth bass urge you to dance like an anesthetized Morrissey fan, while the guitars shimmer with a genuine melodic beauty. It just feels a shame that the inclusion of more experimental elements doesn’t serve to take the band anywhere they haven’t been already.
Owing much to old heroes like The Cure, and with more than an echo of Spandau Ballet, We’re No Heroes also admirably shoulder themselves in between daunting modern names in White Lies, British Sea Power and The Editors, through their bravery to remain submissive and restrained, choosing to let their faded funk and admirable, fun vocal harmonies speak for themselves. Perhaps there is more ‘Ghost’ about We’re No Heroes than they realise; believers and curious dabblers will find much enjoyment in chasing them down, but perhaps the other sceptics will remain uninterested and stoic, as the band continues in perhaps transparent fashion, unfortunately invisible.

Conformist – Paid To Fake It

The Ironweed Project – These Chains Ain’t Gonna Hold Me