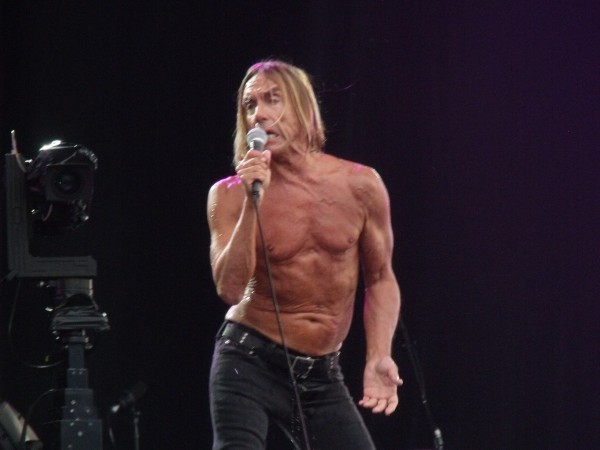 Black stone Cherry (Main Stage) are huge in America and gaining popularity in the UK, they have a nice sound but today’s performance is nothing special and below anything they can deliver. They play a slow version of Amy Whinehouse hit ‘Rehab’ mixed with their own song ‘Blame it on the Boom’ which just seems like a cover they did for the sake of making some new people like them and not cause they actually like the song. Anthem ‘Lonely Train’ which is used constantly by WWE on their Monday night Raw show is the only redeeming moment in a set that just passes you by. There is a lot of bands in their genre and you need to be doing something special which Black stone Cherry had on their first album simply titled ‘Black stone Cherry’ they had this but now they have lost it cause they have just got complacent.

Red white and Blues (Pepsi Max Stage) I was really looking forward to seeing this band cause I loved their debut record ‘Shine’ and all the bands they have been in before like ‘Skin’ and ‘Jagged Edge’ and they start off well. After a few songs you realise they are missing something a frontman with a stage presence. Matti Alfonzetti sounds great on the albums but as a live spectacle it just means there is something missing. Frontmen need to have a presence, a certain swagger and they could command the crowd but this is just not happening with this band. The guitar work is great but the songs just seem a bit clinched and average in the live situation. Everything five seconds people are shouting out we can hear the blues but where is the red and white, guess we will never know maybe it’s the British pride.

Cold Chisel (Main Stage) on their best day would send you to sleep they have been around a long time actually from the late 70’s . Nine of their albums even made the top ten in Australia their country of Origin. Their sound is a classic rock Guitarist Ian Moss steps up to the plate to sing the lead vocals for song ‘My Baby’ which is one of the highlights to their set. The rest of the set is a bland teaser of classic rock meets blues that just makes you realise you have time for a toilet break and to get some food. I expected a lot more from a band that have been going so long this just seems to be so bland and boring.
Cold Chisel – Setlist
———————–
Standing on the Outside
No Plans
HQ 454 Monroe
Cheap Wine
My Baby
Rising Sun
All for You
You got nothing I want
Merry go Round
Flame Trees
Khe Sanh
Bow River

Skindred (Pepsi Max Stage) have upped their game in the last couple of years and they are starting to be known as a welsh wrecking ball. They mix up the metal sound of the 90’s with 70’s funk and American Ska and singer. Benji is a picture in gold his look is a kind of Reggae disco on a Friday night in the Point in Cardiff or at the Rewind bar round the corner. They mess around with riffs from Metallica’s ‘Sad but True’ and the theme to Shaft but it’s not until their own song ‘Nobody’ they ignite into action like a buffalo soldier and last song ‘Warning’ is a crowd pleaser. Skindred have defiantly come a long way in the last few years and are now very popular.

Iggy Pop and the Stooges (Main Stage) is a legend of the punk and rock world and today he shows why with a set of all killers and no stinkers. He starts of with the amazing ‘Raw Power’ and follows it up with ‘Search and Destroy’ which are both two of the best records ever written, and then to follow it up with ‘Gimme Danger’ you realise what an arsenal of songs he has at his finger tips. Some people say that he is past it but his vocals sound as good as they have ever done and he still jumps around like he is on a pogo stick. You can still feel the loss of Ron Asheton after his death in 2009 but they found a great replacement to fill his shoes in James Williamson. It fits really well because James played on additional material for Raw Power and worked with him in a lot of early sessions, no one can replace Ron but James is the next best thing and he makes the band really work and today in Hyde Park it is really working. They even play some of the Iggy Pop and James Williamson material songs ‘Night Theme’ and ‘Beyond the Law’ which both are a great mid set interlude with ‘Johanna’ and ‘Kill City’ to follow later both songs that Iggy Pop did in his solo Carrier. So today’s set is a good mix of songs that make you understand that sometimes you don’t need to be top of the bill to dominate a festival and in the sun that came after the rain they certainly do that.

Mars Volta Pepsi Max Stage) are a seesaw of rock and Prog you never know what you will get from them and todays set is a mix up miss match of both these genres. They have quite a few songs but sometimes they feel the need to experiment a little too much. Singer Cedric Bixler-Zavala and guitarist Omar Rodríguez-López were best known for their work with their band At the Drive-In which they disbanded to form Mars Volta and then brought back to life in the last year. Drive through a set of synchronized sounds and blended soul. The onstage antics are quite planned and the sound is very experimental blending into a very good connection with the their other band mates and not with the audience which don’t really know what to make of the band.

Soundgarden (Main Stage) haven’t sold that many tickets today as a headliner and Hyde Park seems a bit empty and they are going to play a massive two hour set so this is going to be a tall feet for the grungers. They like Pearl Jam and Nirvana were one of the leading forces behind the grunge scene, but after the disbanded of the band and Chris Cornell going solo and later Audioslave, the records have not held the test of time as well as the two other mentioned bands. There was one album that has though and they play ‘Spoonman’ and ‘Black hole Sun’ of this said album the 1994 album ‘Superunkown’. I think this was their finest moment and these songs are a leading light in the early part of their set only to be distinguished by Chris Cornell’s dreary voice later on. The video screens are as grey as the pain that he seems to drag into all his songs and listening to some of them just brings you mood right down and you find yourself looking at your watch wondering how much of this there is left and realising they have only played an hour and have another left. They try to lift tempo many times during the set but the songs and down beat melodies just bring it right back down again. You can see a lot of people have had enough and are leaving and you start to think how many hit songs that this band actually had, I could only name four that did well, or was it four that I liked, I know they are really respected and they have some die-hard fans but I am sure the songs weren’t originally meant to be played in such a depressing way.