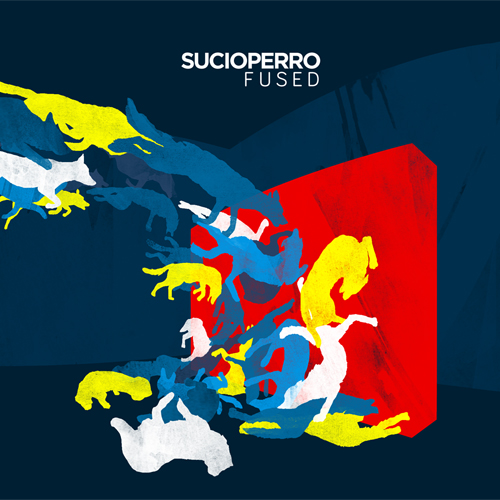 It can’t be nice for any band to live out their existence in the shadow of another, much more successful, one. But surely, a point must come when that band should accept that from now on they’re going to mainly spoken of as a kind of badge of honour at the larger bands arena gigs? They must accept that the most exposure they’re going to get is when hardcore fans of the larger band prove their loyalty by saying “I’ve seen (insert other band here) live 5 times!” It’s the Beans On Toast/Frank Turner connection, as he puts it, Beans is “famous at Frank Turner gigs” and pretty much nowhere else. Sucioperro are a paid up member of this most auspicious of clubs, their biggest exposure being when frontman JP Reid dons a gimp mask and clowns about in Marmaduke Duke with one Mr Simon Neil, whose day job involves going topless and fronting Britain’s biggest rock band Biffy Clyro. However, fortunately enough, Sucioperro have always been a band well worth their famous patronage and continue to expand their devoted cult following with this, their latest record.
Musically it’s essentially what would have happened if Biffy themselves had perfectly melded their pop sensibilities with their bat-shit crazy, anything goes mentality exhibited in their early work. Unlike their previous effort The Heart String and How to Pull It, this is a balls out rock record from start to finish, largely dismissing technicality in favour of pile-driving, slab-like heaviness, see Discipline Office or opener A Pool Of Blood for more details. What A Fucking Chump also swaggers like Reuben at their heaviest with sexiness instead of profound rage powering the noise. Of course, any comparison with Biffy Clyro would be invalid if there weren’t plenty of curveballs to keep things interesting, from straightforward changes of direction, like the acoustic led build of Rabbits In Boxes, to the baffling Mein Kleine Taube interlude. There is nothing here that suggests that Sucioperro aren’t utterly ace at what they do, but this is an impressive record. A highly impressive record, make no mistake, but not a great one. The truth is there isn’t all that much to love here.
It’s an extremely detatched record, which, lyrically speaking, rarely stops raging about anything with neither the wit or directness that lets Future Of The Left get away with whole albums of bile and fury. It’s no coincidence that the album’s best moment is the title track, the most optimistic and melody fuelled moment on the record, but this could just be the pop-loving wuss in me speaking. If you like your Rock and Roll hard, heavy and kind of baffling on the first listen then I can’t recommend this enough, and live it will be sensational, but there is still work to be done before Sucioperro get the recognition they deserve, however I can’t deny that it’s tantalisingly in their reach.

Sebastopol – HELLO ALL STATIONS, THIS IS ZERO