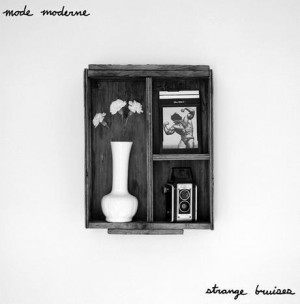 Right off the bat, only fans of a certain popular Manchester beat combo need apply for this E.P. Mode Moderne have an… interesting sound that is essentially based on taking this popular Manchester beat combo’s back catalogue and, when they can be bothered, sticking some synths on them. Unfortunately, I’m not a fan of this popular Manchester beat combo, so this E.P is very, very difficult for me to praise. That said, the fact that whether I like this E.P is decided on whether or not I like this popular Manchester beat combo should probably say a lot about the originality of Mode Moderne, and as you’ve probably guessed, I really, really don’t like The Smiths. Because of that this E.P fails for me. The real issue here is that even if I did like The Smiths, the fact that it’s very, very rare for any band that sounds a lot like another band to do it that well, I’d probably give it a thumbs down as well. So enough about who it sounds like, let’s talk about what it sounds like.
Credit where credit’s due, Mode Moderne know exactly what they’re doing and perform it well. See the tight musicianship and mile a minute tempo of Electrocute Me for proof of that, but the real issue does lie with singer Philip Intilé’s voice. The main problem I have with The Smiths is Morissey’s vocals, so when a singer comes along who sounds exactly the same for ninety per cent of the record (and when he’s not he’s doing an on the money impression of and Ian Curtis tribute act) it’s all I can do not to break out in a rash. Even if I did like his voice the fact that he’s so in thrall to it instead of trying something new would probably be even worse. So I’m afraid I can’t recommend this E.P, Smiths haters will hate it, Smiths fans will think that The Smiths do it better, and everyone in between might want to check it out if the concept of “Mope-pop” appeals to them, but then you’ll most likely know of someone else who does it better.

We Are Augustines – Book Of James / Philadelphia