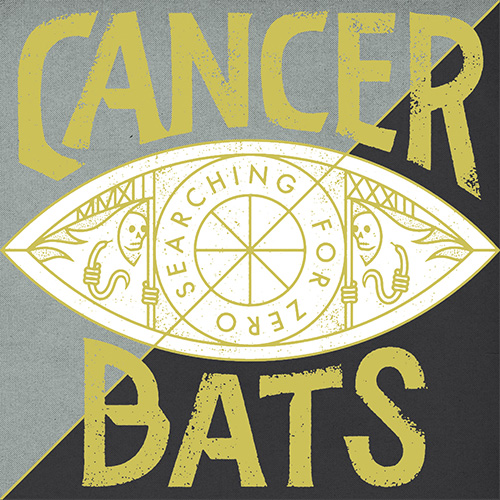 Cancer Bats have been reborn in the face of tragedy, reincarnated and Searching For Zero with a typically unforgiving, grinding fury. ‘If you can change, change what you can’, Cancer Bats have changed, growing as a band and transforming within the album, creating something that challenges at every chord change.

The album motto and final track ‘No More Bullshit’ is provoked by a difficult year for the band (‘too many friends have died this year’) and this translates musically in songs such as ‘Satellites’ and ‘Devil’s Blood’ which are confident metal tracks, thrashing through discontent. Both are standout album tracks, the later featuring fast-paced drum-heavy verses, scratching guitars and blazing offbeat choruses.

In the face of contemporary metal Cancer Bats still honour their classic-metal influences, channelling Sabbath sounds and 1980’s high metal motifs through songs such as ‘True Zero’ and ‘Beezlebub’. Punk and thrash are still at the heart of this bands style and are furiously praised in ‘All Hail’, a standard song’s worth of screaming guitars and mayhem crammed into one and a half minutes of pure rage.

Cancer Bats have made Searching For Zero an album of interesting dynamic variety, mixing the styles of vocals, which are merciless and at times somewhat challenging. Singer Liam Cormier described working for the bands alter ego Bat Sabbath: ‘I ended up having to figure out how to really sing’. The latest release is a testament to his work and ambition of echoing the likes of Ozzy, Ward, Walker, and Dio.

At the start of ‘Satellites’ it sounds as if you are standing outside a metal club, as the distorted screams evade the clustered soundproofing of black-shirted bodies. Yet, through ‘Beezlebub’ you feel as if you are on the bar, three feet from chipped sticks and bloodied frets. Right there, next to the speakers, enraptured in a winding epic. By ‘Dusted’ you follow the sound-checked drums into something altogether dirty, threatening and industrially murky. The album takes you out of your aural comfort zone and doesn’t let up until it is finished.

These challenging entries create a Cancer Bats album to follow and revisit. The rising darkness is sometimes punching – the wall of metal we know and want – but the band prove they can create something more complex and at times anthemic, raising our fists from swirling solos and screams. This music was made to be played loud with a “Do Not Disturb Sign” cast in steel. Your neighbours will learn to thank you.

The rising darkness is sometimes punching – the wall of metal we know and want – but the band prove they can create something more complex and at times anthemic, raising our fists from swirling solos and screams.