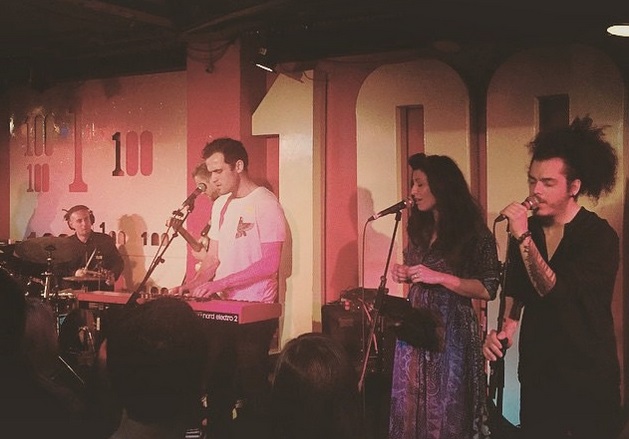 Having seen Jordan Rakei perform at St Pancras Old Church earlier this year, I was eager to get myself down to Soho to witness his second London appearance. Originally from New Zealand, brought up in Australia and recently set up post in London, Rakei has been quietly growing over the last 6 months, soaking up the creativity London provides. He has now firmly established an instantly recognizable sound and showcased this at the legendary 100 Club on Friday.

100 Club has been a renowned London venue since the 40s, hosting the likes of The Rolling Stones, Louis Armstrong and The Clash. The interior hasn’t changed since the 70s, which complements its simple charm.  It was the perfect platform for Rakei; the show was impressive and the history of the venue made it feel like the unveiling of an artist who I expect will become increasingly prestigious over the coming years.

7-piece band, Retrospective For Love kicked off the gig with a compelling and driven performance.  Sicilian singer, producer and rapper Davide Sciortino joined forces with Parisian singer Leslie Phillips, along with an array of talented instrumentalists, to form the self-dubbed “symbiotic creative collective of enlightened minds”.  Evidently influenced by a huge range of genres, the band infuses dub, hip hop and of course, soul. They have an infectious sound, which had the audience grooving from the get go.

After a swift change over and a quickening of audience excitement, Jordan Rakei and his band hit the stage. They were tight off the bat, with complex rhythmic patterns and bluesy chromaticism that kept you on your toes.

The release of reggae-infused ‘Franklin’s Room’ in September 2013 created an initial surge of exposure.  Rakei confidently returned with the release of his second offering, ‘Groove Curse’, in August 2014 on Brisbane-based label Soul Has No Tempo.  The 5-track EP drew his sound deeper into neo-soul and this progression demonstrates Rakei’s ongoing development as an artist.

‘A Tribe Called Government’ was the ideal track to get the audience singing along.   Not afraid to explore different avenues, the live performance unveiled a more sophisticated jazz set up, with intricate accompaniments and decisive changes in time signature.  Rakei’s vocals were on point and the band sounded impeccably rehearsed.

The performance at St Pancras Old Church in February was a totally different experience. With no instrumental support, Jordan used the acoustics of the church to deliver a down-tempo solo set; it was impressive, but last week’s performance at 100 Club was in a whole different league. With notable tracks such as ‘Hope’ and ‘Add the Bassline’, the show was well and truly underway.

One of my favourite pieces was his independent version of FKJ’s ‘Learn To Fly’, which Rakei featured on originally. It was a totally different rendition, incorporating a stop-time introduction, which was seamless and highlighted the harmonious interaction between Rakei and his band.

Next up was a soulful cover of Little Dragon‘s ‘Constant Surprises’, followed by a collaborative performance with London’s own Barney Artist.  Barney has been gaining significant traction in the London hip hop scene since the release of his ‘Bespoke’ EP last September.  The pair, along with fellow rising artists Tom Misch and Alfa Mist, have recently formed a podcast collective: Are We Live. I’ve heard on the grapevine that the four are planning a live show in the coming months, so keep your eyes peeled, it’ll be one not to miss.

The performance of ‘Street Light’ guaranteed the audience’s attention with more complex stop-time rhythms and swiftly interchanging key signatures.  Although occasionally you can feel dissatisfied from hearing reworked editions of songs you know and already love; I found Rakei balanced this well, retaining the original enjoyment but spicing the performance up enough to bring something fresh.

The show was concluded with an encore of ‘Alright’ and ‘Selfish’, two of Jordan Rakei’s most recognizable tracks. It was clear from the crowd’s reaction that he has founded a concrete fan base, particularly in London.  After only a few years of experience performing, Rakei has developed remarkably natural stage presence and audience engagement (even with his eyes shut)!

The Gaslamp Killer To Debut Live Show In London This Thursday!