…And onto day two of Hevy Fest 2015. For coverage of day one, please click here.

Starting off the second day was Trash Boat on the main stage, who tried to kick the crowd into gear during the mid-afternoon, which kind of worked, yet the band felt…well a bit flat. Their sound doesn’t translate very well to the audience and while their performance is jumping, pogo-infused pop-punk, the set is unfortunately sub-par.

Over at the main stage, Vales’ set was a splendid surprise, as it turned out to feature some new material from the band, but with a massive difference: the vocals were all clean. Chloe, the vocalist, is known for her guttural screams, but this afternoon we were treated to something different, and they pulled it off very well. The new material did nothing to upset the balance with the old, and when Chloe got up close and personal with the crowd, she brought the band back full circle, combining the fierce attitude they are known for with the newfound confidence in her ability as a singer.

Next are Milk Teeth, a band who could become a force to be reckoned within the UK scene – not long ago they signed with Hopeless Records and scored recent support slots with the likes of Title Fight and Frank Iero and The Celebration. Big things could be on the horizon for this young band. Their set was predominantly filled with tracks from their Sad Sack EP, the stand-out being the infectiously catchy ‘Swear Jar’. Although their sometimes-slow, brooding sound may not be as instantly catchy as other sounds featured at the festival, the band certainly left their mark.

Blood Youth then take to the second stage, a band made up of a now defunct act formally known as Climates, and neither band is too dissimilar from the other. However, Blood Youth’s sound is a little less melodic than that of Climates, but after a short time the direction becomes easy to second guess, and loses that excitement felt early on in their set.

On next we have Manchester’s Broken Teeth, who are quite a departure from Blood Youth: musically, the sound is more straightforward. After seeing this band countless times over the last five years I can safely say that they have gotten tighter with each performance, and are now at a level where they are clearly comfortable with themselves and how they perform – this is more than evident today.

The fact that As It Is have been giving the task of playing the main stage is something that I feel is a bit lost on members of the audience. Having recently scored a deal with Fearless Records the band have been picking up the momentum, but that momentum feels like it fell flat today. There is something to be said about that fact that pop-punk, like pop music will undoubtedly get your feet tapping, but after a while the singer’s voice became irritating and ultimately diminished the music.

Arcane Roots take the stage and the audience begins to liven up. With little time, the crowd are being led and commanded by guitarist and vocalist Andrew, who is undeniably a force to be reckoned with, as he propels the crowd into motion with his bellowing vocals, which come with huge riffs throughout their spectacle of a set. 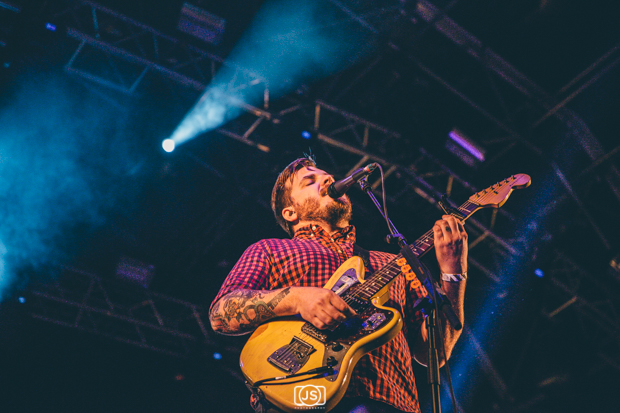 Over at the second stage there was something a bit different awaiting the crowd, a band fairly new to most in attendance like myself, but then a familiar face appeared, that of Pat Flynn formerly of Have Heart. This new outfit is Sweet Jesus, a band who are not all that different to Have Heart – the positive messages are still evident, an obvious trademark of hardcore music. Pat himself has always been outspoken on the issues of men and women, and one that struck with me the most during their set was the image about the masculinity of men and its uncompromising demand for men to behave a certain way – something that I think that we all could take away with us and think about.

Continuing with the festivals assortment of bands performing albums in full was The Fall Of Troy, who were performing their album Doppelganger, an album laden with guitarist Thomas Erak’s technical but catchy riffs, which he plays so effortlessly. It’s almost unbelievable how well he performs – and not just him, but the entire band. Were it not for Thomas, however, there would be a void in their sound: he makes it sound like there are two guitarists on stage instead of just one. This created a bigger wall of sound, which the audience are enthralled by; everyone is in the moment, enjoying this compelling experience.

The Get Up Kids continue the trend of albums being played in full and perform their much celebrated record Something To Write Home About. This band, much like Jimmy Eat World, are considered to be the definition of an “emo” band. Although the term is still a loose one, the emotion poured into this record is endearing, especially ‘I’ll Catch You’, which closes the album off perfectly with a rousing sing-a-long.

Finally though, the moment we had all been waiting for, tonight’s headliners Thrice, who hit the stage to a fantastic response. Despite being out of the limelight for three years, they did not disappoint. Covering a catalogue as long and as varied as theirs in one set could have its challenges, but the band accomplished it with ease, from the earth-shaking songs (no pun intended) ‘Firebreather’ and ‘The Messenger’, to softer songs like ‘Dust and Nations’, ‘Beggars’ and the classics such as ‘The Artist In The Ambulance’, ‘Silhouette’ and ‘Deadbolt’. Overall, the band were every bit as exciting as I could have hoped and a perfect closing act for Hevy Fest 2015 – I just hope this won’t be the last time they tour England again. Here’s to next time!

SONS OF KEMET – In Memory of Samir Awad