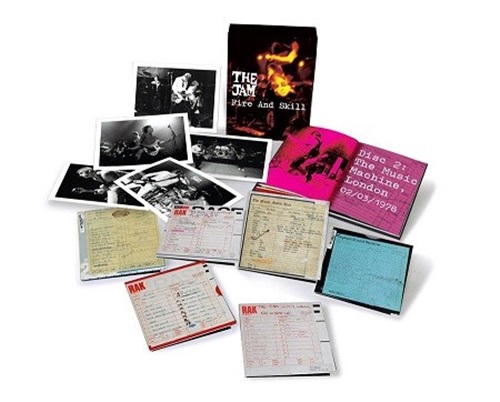 Influential punk rock and mod revival band The Jam were extremely hot and tight. They had an “angry young men” image and were very popular during the late 70s and early 80s. Very individual in style, they embraced 60s rock and R&B influences and wore smartly tailored suits.

Decades after they began touring, a live 6 CD deluxe box set Fire & Skill: The Jam Live is to be released by Universal/Polydor on 30th October, 2015 after remastering at Abbey Road. It’s named after the legend painted on Paul Weller’s amplifier and features six previously unreleased concerts, one from each year of their label career.

The first CD is a 1977 gig at London’s legendary 100 Club which took place 10 months after they first played the venue in November 1976. It was recorded for broadcast on American radio ahead of their first six date tour in the USA in 1977.

A 1978 Music Machine show, containing most of their 2nd album This Is The Modern World, is found on CD2. The show was a low-key event to publicise their new ‘News Of The World’ single. CD3 is from Reading University in 1979 and showcases material from their breakthrough album All Mod Cons which was critically acclaimed and resulted in The Jam becoming established as a prominent new wave band.

CD4 is a preview of songs from the forthcoming album Sound Affects, live at Newcastle City Hall in 1980, and a legendary Hammersmith Palais performance in 1981 features in CD5, previewing material from their forthcoming final album The Gift. One of the band’s ‘farewell tour’ gigs at Wembley Arena in 1982 appears in the final CD6.

Fire & Skill: The Jam Live comes with a 72 page colour hard back book in a lift off lid box. It includes new period photos, scarce memorabilia, a collection of five postcard prints and gate fold disc wallets which are designed as facsimiles of the original tape boxes. It’s probably an essential addition for committed fans who have fond memories of this rough, joyful, fiery and highly energetic band that stunned and inspired youth culture at the time.

An essential addition for committed fans who have fond memories of this rough, joyful, fiery and highly energetic band that stunned and inspired youth culture at the time.

A CHAT WITH: DIRK SWARTENBROEKX