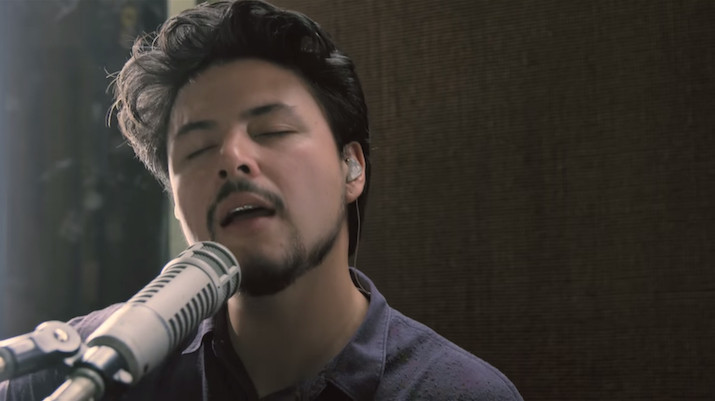 Anyone who knows me or reads my stuff will be aware of my adoration for Jamie Woon. I love the man: his music, his personality, his underdog status, his hair…I could go on. I really missed him when he retreated from the limelight two-three years ago, into what seemed like a sudden, unexplained hiatus. Had he retired? Was he ever coming back? Woon would pop up every now and again (collaborating with BANKS, Disclosure and, earlier this year, Portico)… I even saw him lurking at the back of Débruit’s Boiler Room in London in 2013 (Jamie, I promise I’m not a stalker). But, hell, even I had started to forget about him as 2015 rolled on. Yet, here I am, penning this review of his excellent Berlin gig at Prince Charles, listening to his extra excellent new album Making Time. It feels good to be alive.

The greatest (if not only) difference between the Jamie Woon of 2011 and the Jamie Woon of 2015 is just how confident and at ease he seems on stage (I mean, he definitely has the same hair…lovely, lovely hair). The early gigs I witnessed, whether large (Shepherd’s Bush Empire) or small (secret set at Secret Garden Party), felt dominated by his insecurities, which I always put down to the unfounded and unfair comparisons to one James Blake. Despite initial buzz (thanks to the BBC Sound Of poll and early collaborations with Burial), Woon was ultimately cast aside (at least by the press and mainstream) when James Blake was crowned the victor in their race to become the pin-up of post-dubstep – a race he never wanted to be part of, nor ever should have been part of. Sure, Jamie Woon’s blend of neo-soul, contemporary R&B and electronics shares a few similarities with Blake, but their debuts were striving for two totally different tones, and Woon was effectively penalised for his subtlety.

If his hibernation was an attempt to distance himself from all that hullabaloo (Blake, Burial, post-dubstep et al.), then Making Time is his statement of musical intent: an album that softens the garage shuffling and murky beats of his debut, and further explores the smooth, night-time soul that he was always concerned with. So, tonight the cut-up vocal looping and brooding programmed beats of yesteryear are replaced with sampled brass, two male backing vocalists and a bassist so funky his lines made me slap myself in the face. And Woon, who used to perform hovering over programming pads not too sure what to do with his hands, keeps himself musically occupied with a guitar throughout, as if to say: ‘my songwriting is the focus here, not me’.

Tonight’s Prince Charles set leans heavily on his newer material, with the early airing of ‘Movement’ and its Justin Timberlake-esque slinky pop making the vibe clear: FUN not brooding. And the audience is in full agreement, with constant applause, hollering and dancing. Who knew Berlin had missed Woon this much too!? Renditions of older songs like his signature hit ‘Night Air’ feel more vibrant with this touring set up, and the neo-soul funk of newer single ‘Sharpness’ (a tune up there with anything JT, Miguel or even, dare I say it, D’Angelo has produced in recent times) is pitch-perfect and electric. Even the ballads, which often resulted in lulls during his 2011-2012 shows, sound full tonight, conveyed with a renewed conviction, perhaps born from his newfound confidence.

‘Dedication’, with its layered vocals, makes the best use of the exquisite backing singers, while the Willy Mason co-write ‘Celebration’ is oldschool soul at heart, featuring a soaring melody and stomping brass parts (if only Woon had the budget for a live brass section!). Set highlights include the singalong-inducing cover of Aaliyah’s ‘Try Again’, the encore of ‘Lady Luck’, which has every musician in full swing, and the unexpected second encore of the delicate ‘Little Wonder’, prompted by the audience’s stubborn applause, stamping and yelling. Berlin just wasn’t quite ready to let him go, perhaps worried he might disappear back to the shadows for another hiatus. Don’t leave us again, Jamie Woon.