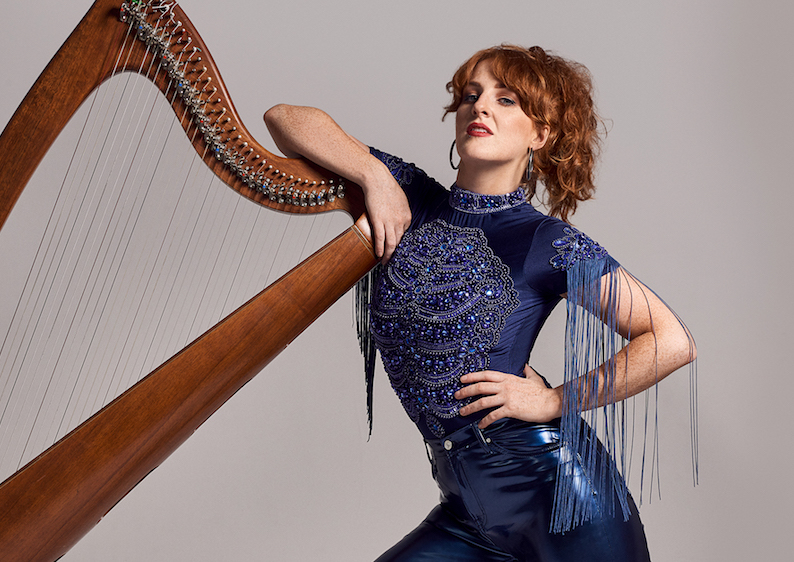 I am Lisa Canny – from a small village called Hollymount, Co. Mayo in the West of Ireland. I am the youngest of 3. I have 65 first cousins. At family events the sing-song starts at about midnight. Everybody can sing so we usually get to bed about 3 days later.

My mother singing to me and family get-togethers were my first experiences of music I suppose. Then when I started primary school a teacher of mine, Mr. Sean Nestor, gifted me a banjo as he thought that I had a musical ear. At just 5 years of age the banjo was the size of me but that was the beginning of this mad journey I’ve been on since. For many years all I played was Irish traditional music and this is still very much where my heart is.

That said, I was also hugely inspired by what my friends and family were listening to. My best mate Emma was all about her Eminem and I thought she was the coolest person in the world so naturally I listened to him too. My sister Laura listened to Cyndi Lauper, Lisa Loeb, The Extreme, Roxette and Tori Amos and being the eldest would normally have one of these blaring from her room. I later found that I was hugely influenced by this type of 90s pop in my own writing. I was a big Spice Girls fan, with 80+ posters on my wall and the shiny cord belly top set at the top of my drawer for daily wear! Mix all those together and you end up with what I now create… everything from rap and pop to Irish traditional folk music.

After becoming totally obsessed with the banjo I then picked up the piano and harp. I entered what is known as the Fleadh Cheoil (translates to Festival of Music) each year in Ireland and was lucky enough to walk away with 7 All-Ireland titles throughout my competing years. This opened many doors for me and when I was 19 I got the call to go on my first international tour with a show called “Celtic Crossroads”. I toured the States, Canada and Europe on and off for 6 years with Celtic Crossroads and other groups: performing in front of thousands of people every night; living on a tour bus; seeing the world through music. Meanwhile I did a BA in Music and Dance at University of Limerick and then went on to complete a MA in Ethnomusicology at University College Cork.

It was after my MA that things changed up a gear. I was performing in LA with Celtic Crossroads when Miles Copeland approached me (former manager of The Police). Copeland took me under his wing and 4 months later I was sitting in a castle in France alongside 18 of the biggest artists, producers and songwriters in the world at the time including The Kaiser Chiefs, Plain White T’s, Mike Posnor, Priscilla Renea, Brett James, Hillary Lindsey, Jodi Marr to name but a few. This was my first exposure to songwriting. I became totally obsessed with it and a year later and I had signed my first publishing deal and was jetting off to Miami to work on a EP Of course, things don’t always go to plan and the trip was cancelled last-minute by the producer. A little disheartened I nonetheless continued on my journey.

The hard work started to pay off in 2015 when I debuted my own material across Ireland, as support for Irish man-band Hermitage Green. In 2016 I moved to London and in the same year was crowned UK “Future Music” songwriting champion. In Jan 2017 I appeared on the Late Late Show and in April 2017 signed my first management deal with Music Crowns, London. The next 12 months saw my online videos exceed the 2 million views mark, a nomination for unsigned songwriter of the year 2018 by UMA, sell-out shows in London and Ireland, the release of my debut EP “Freedom”, and writing sessions with Priscilla Renea, AKON, and Melissa Etheridge.

I love performing! I am so at ease on a stage. I like to crack a few jokes in between songs so as to put the audience at ease too. Musical performance wise – I like to keep the energy and dynamic high whilst also throwing in the odd slow and ethereal number.

I guess having the harp and banjo front and centre is the first thing that catches somebody’s eye and ear. Then I suppose my mix of Irish folk, hip-hop and pop make up a pretty unique sound.

I have a vinyl record player I prefer to listen to music on but I use Spotify and iTunes on the go. I think they both have a place in the industry and I am grateful to have access to both. I have some music on Spotify. Of course I would rather if people were listening to my music on a vinyl but the reality is that many more ears have access to Spotify. I personally think that I would be foolish not to use the online service to reach bigger numbers, at least in this first stage of my career.

New release coming September with a duo I’m in called MOM (think Drake with banjos). I am in the States until December working on some things, then tour December/January. Stay close to Facebook and Instagram for dates.