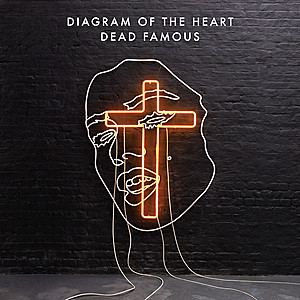 AAAmusic asked two reviewers their view on the new single ‘Dead Famous’ by Diagram Of The Heart. Here’s what they both think of it!

– The first single is a vitally important stage of a bands existence. It needs to say everything the band in question wants to say, set out their manifesto, shout from the rooftops “HERE WE ARE, LOVE US!” louder than every other band doing to exactly the same thing. Fortunately Diagram of the Heart have done just that, Dead Famous is an impeccable slice of synth-pop that manages to be impossibly catchy while still alluding to the potential that the band have. It does need multiple listens for one to genuinely get it, and it sounds a bit repetitive at first listen, which isn’t the best strategy in today’s pop climate that rewards the most immediate record around. But Kye Sones’ phenomenal pipes can hold the attention of even the most determined ADHD sufferer. Quite simply a great record.

– And how pop can you get? Answer: very. How well can you handle going that pop? Now that’s another question, and in the case of Diagram Of The Heart, this too can be answered with “very”.

‘Dead Famous’ is, on the surface, almost a pastiche of those dance tracks that have been buzzing about the radio since the 80s, starting with soft piano-and-strings intro, but when the tuneful vocals start, and this is where you realise that actually we’re onto something quite special, because this is not another auto-tuned rave flash in the pan here. What follows has practically every club synth you could hope for woven into a deceptively simple-sounding sonic tapestry, but underneath it all is an undeniably human heart that has written a rather beautiful pop song.

The music here has definitely set up camp in the fields of dance pop, with a thumping electrified drum beat and an addictive tune with enough hooks to outfit the cloakrooms of every club it will inevitably be played at. However, as mentioned before, this is far from vacuous dancefloor fodder. The tune in itself, for all its electro trappings, is enthralling, and the lyrics are a smart and surprisingly endearing pop gem dwelling on the humanity of those in the limelight, for better and worse.

The b-side is an instrumental version of the song, which could easily come across as incredibly pointless filler material, but it has to be said that even to the ears of a punk rock classical violinist, it stood up as a very well-thought-out piece of music with some cleverly executed parts.  It’s not complex or groundbreaking, but the band have created something that is in actual fact a very appealing piece of music that just so happens, as icing on the cake for the people who like intellectualising their pop, to have some smart and heartfelt lyrics.

Diagram Of The Heart may in fact be in with a chance of a well-deserved big break, as they not only have pop songwriting down to a “T”, but the musical knowhow to back it up.