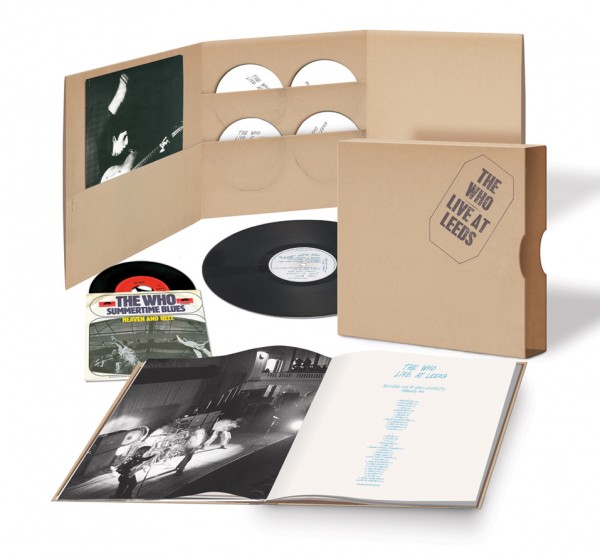 “What hits you when you listen to it is you realise how much you need to see the Who” – Pete Townshend, 1970

‘Live At Leeds’ was the ultimate confirmation of the Who’s sheer ferocity as a live rock act without equal. Whereas their studio recordings had only tantalisingly hinted at the all-out barrage of the senses that a live Who gig produced, Live At Leeds removed all doubt.

Following on the heels of the success of the ‘rock opera’ Tommy, and the band’s grandstanding appearance at the Woodstock Festival, when released in 1970, Live At Leeds unwittingly documented the Who at the peak of their powers, whose shows now stretched up to two and a half hours without a break containing Tommy as their centrepiece.

Except it should have been very different. The original intention was to release the recording from the Hull City Hall performance the following night after Leeds as the live album. The recording from Leeds, the first gig of the tour, was largely set up as a back-up in case there were any problems with the Hull recording. Suffice to say, upon listening to the tapes it was thought that John Entwistle’s bass was missing from the Hull recording. With little they could do to repair the tapes in those days, the band went with the Leeds recording for release instead, despite preferring the Hull performance. “Hull was a better gig than Leeds,” recalls Roger Daltrey. “I remember it like it was yesterday, although in retrospect ‘Live At Hull’ doesn’t really trip off the tongue!”

Now years later the Hull tapes were revisited and it was discovered that because the first reel consisting of four tracks had no bass, everyone had assumed that the whole show had no bass and didn’t listen to any more of it, but in fact the rest of the gig was complete.

Through the wonders of modern technology, however, the full Hull recording has been repaired by flying in Entwistle’s bass tracks from the Leeds recording to repair the Hull tapes and is now available in its entirety for the first time ever.

Captured on the Super-Deluxe 40th Anniversary Collectors’ Edition of this landmark of live albums, at the time, live pop or rock albums tended to be primitive affairs when capturing both band and audience. Live At Leeds was no exception, recorded on a mobile unit placed amid the kitchen of a university refectory in an unassuming industrial town in northern England. But the results – crackling noises and all – were enough for influential pop culture writer Nik Cohn, to describe ‘Live At Leeds’ in his New York Times column as “the best live rock album ever made.” As recently as 2006, it topped a poll in Q magazine of the greatest live rock albums ever made – a testament to its enduring legacy.

This new edition of one of the most important live rock albums ever contains:

• Housed in a hard-back box with cover artwork reproducing the original black stamped vinyl first UK pressing which, according to the July 2010 edition of Record Collector magazine, is now valued at approximately £250 in mint condition.