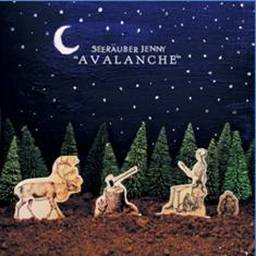 ‘a driving piece of pop, as infectious as it is intense, that should see them get noticed for much more than their back story’ – BBC

Seeräuber Jenny present their second single ‘Avalanche’, released on Faith & Hope Records on March 7th 2011. A striking follow up to their debut, this single is another compelling and intensely layered slice of lo-fi melancholic pop. The B-Side ‘To Decide (We’ll Cast Lots)’ accompanies the release showing a dynamic side to the band’s creative musings, a beautifully crafted melody with heart-felt introspection.

Seeräuber Jenny is…a combination of an old English folk sensibility with the cinematic pastoral sweeps of Americana; a Super 8 sound bolstered by an understanding of things electro. This is not finger-in-ear folk though, nor the earnest warbling of bearded men, but rather the best of old and new worlds, a cocktail of richly textured melancholy that recalls the mini-melodramas of Arcade Fire, the haunted melodies The Cure, the uplifting musical surges of Fleet Foxes or the fragile story-telling of Bright Eyes.

Seeräuber Jenny is…collaboration between singer /songwriter Fran Barker and musician / producer Neil Claxton. Fran hails from Chippenham in Wiltshire and Neil is based on Manchester. Neil has previously enjoyed a successful career with big beat leading lights Mint Royale, who have enjoyed No.1 and No. 2 singles, as well as collaborating with the likes of Lauren Laverne and Duffy and doing much remix and soundtrack work.

Last year saw the band build significant momentum on the strength of their debut single, from the BBC who invited them to play the BBC Introducing and BBC 6Music nights at 2010’s In The City; from Huw Stevens who picked the band to play the Radio 1 Big Weekend Fringe Festival; and from MySpace after they won The Best Of MySpace competition. Live, the duo expands into a full band and 2011 will see them getting busy.

A live show not to be missed, you can catch the band perform at the following