Birds Of Avalon 12am

Our bands at day parties: 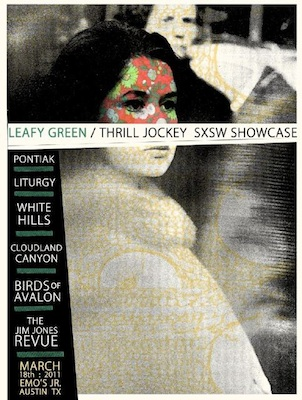 Pontiak will be debuting new songs from their upcoming “Comecrudos” EP (June release), and a new full-length album coming in the autumn.

Liturgy‘s Thrill Jockey debut album Aesthethica is will be released in May.

White Hills just finished H-p1, a new full length coming out in June, and recently released the “Stolen Stars Left for No One” EP.

Gregory St. Pierre also known as GSP is a video artist/performer working out of Baltimore, Maryland USA. Greg grew up in Providence, RI and relocated to Baltimore to attend college at Goucher College where he and a few friends started the experimental/neo-tribal/drone band Teeth Mountain. He got his start doing live video by extensively touring nationally and internationally with Teeth Mountain but now collaborates and tours primarily with the Baltimore based electronic musician Dan Deacon. In 2010, Greg performed with Dan at festivals such as Bonnaroo and Moogfest. Recently, Greg has collaborated with Prince Rama and performed at the New Museum of Contemporary Art in New York and the “Netmage.11” Live Media Festival in Bologna, Italy. Greg has also worked with other groups such as Lightning Bolt, Deakin (of Animal Collective), and other local dance groups and musicians in Baltimore to create small to large scale experimental/psychedelic multimedia performances.