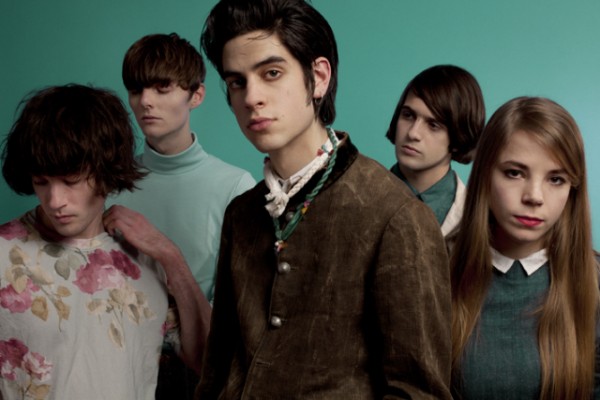 S.C.U.M are set to release their eagerly awaited debut album Again Into Eyes on Mute on the 12 September 2011.
A genuinely triumphant arrival, the album features ten stunning tracks including forthcoming single ‘Amber Hands’, that reel from glorious carnival-esque euphoria to a sound that occasionally flirts at melancholy and utter despair.
Again Into Eyes was recorded in London with producers Ken and Jolyon Thomas (whose credits individually and together include Sigur Ros, M83, David Bowie, Psychic TV), the album standouts include ‘Faith Unfolds’, ‘Summon The Sound’, which featured on Mute’s recent exclusive Record Store Day vinyl release Vorwarts and the utopian, future-disco monolith that is ‘Whitechapel’. Indeed, the bands individual listening habits in psychedelia, space-rock, avant-garde and ambient soundtracks collide to form a pop trip that neatly balances the innovative with the rapturously danceable to great effect.
First single from the album, Amber Hands, is released on 18 July on 12” and download and features exclusive remixes from Silver Apples and Sonic Boom.

Based in London, S.C.U.M exploded onto the music scene two years ago with their exciting and intense live shows which quickly grabbed the imagination of fans and critics alike. Since then band have toured extensively across the UK and Europe to a growing fan base.
The S.C.U.M line up of Thomas Cohen (vocal), Bradley Baker (machines), Samuel Kilcoyne (moog), Melissa Rigby (drums) and Huw Webb (Bass) have recently completed a UK tour with The Kills and announce a tour in July that includes Electrowerkz, London on the 13 July. The evening, ‘In The Hall Of Amber Hands’, features live music from S.C.U.M, The History Of Apple Pie and Advert, alongside film screenings from S.C.U.M collaborators Matthew Stone, Ivana Bobic and Gavin Bennett and DJs The She Set, Matthew Stone and Andy Fraser.
LIVE DATES: