I was told by a good friend that I should arrive at Guilfest as early as possible as the roads and the camp site get busy fast.

Taking said advice I hasten down to Guildford as fast I can muster and see that most of the punters actually got their the previous night.

Never fear, we hussle our gargantuan nylon palace into a choice location and stow our gear away for the next 3 days.

I’m pretty sure Friday was the hottest, windless day ever – and we gauge this by the vast amount of singed and charred bodies bobbin’ around aimlessly until the festival opens her gates at 12.30.

The set up of the festival is more or less identical to previous years and so making it easy to navigate around and find what ever you may desire, there are clothes places, food stalls, zorbin areas, gaming arenas, cocktails and lots and lots of music to suit every palate.

Among today’s bands we have a rare and very pleasant chat with upcoming Glasgow Pop/Rock (and even a bit electronic/grungy/ biffy esc without the sellout) its GoGoBot who had an afternoon set on the Good Times Stage (full interview linked to this page), unleashing tracks from the forthcoming album, the set is bathed in sunshine and the mood is just right as our new friends rock out, and it’s a well appreciated rogues cacophony full of great guitars and catchy bits. After a cold beverage we head off to watch the crazed antics of The Computers, who don’t like to stand around much and would rather balance on the pit rail with guitar and mic or jump of or on to stuff – nevertheless, this was good to watch and great to listen too. Throughout the day the usual suspects arrive on stage and around the festival. Echo and the Bunnymen pump out a classic set on the main stage with front man Ian holding onto the mic for fear of sinking and simultaneously working his way thorough 20 smokes.

The crowd are all in the main arena for tonight’s headliner – no other than ol’ saggy, pension dodger Roger Daltrey. Now I am a monster Who fan, but was all deflated when the band arrive on stage wearing their normal jeans and t shirts, the stage is bare say for a small Tommy banner hanging from the rigging. And I’m not alone, it seems the lack of effort, the shortness of visibility has left many a bit unhappy. The general expectations were that the stage would be fit for a super rock group, fit to stand 1hr 45mins of the Tommy set, the band would be sporting the hippiest numbers in town and tell us why, as they should have been wearing zoot suit jackets with side vents five inches long……. but no. It was all like a rehearsal, with little glamour and little flair.

So, like me, the crowd divided and the rest of us went to see Adam Ant, and yes ladies and gentlemen, he stood and delivered one of the best sets I have ever seen. He is awesome, the costumes, the set, the lights and then the songs – and they start with Deutsche Girls and make their way through a load of numbers from Dirk Wears Were’s Sox, and on and on and on, its unmissable, captivating and seductive. I loved them then and I’m burstin’ now. If there is ever going to be a successful comeback it will be Adam Ant, and I cant bloody wait.

Saturday arrives with gifts of wet stuff in torrents on and off most of the day, ah well, it is summer time. I’m a bit hazed today as the stages are a little confused and I’m unsure as to where to position my weary bones. But we hunt out The Farm who have only 2 songs I know, and they were to the 2 that everyone had come to hear…… ah, groovy train – yes I am old.

Peter Andre draws a huge crowd and gives a great stage show for all who can stomach the clean cut looks and perfect dance combo’s. But I did hear he wasn’t happy to have his photo taken???? ‘sup wid dat peetr?

Back on the main stage we gather into a small huddle and wait in anticipation as Razorlight fire out onto stage and go straight into their set – the band are showing off their best clobber and have made a nice job of decorating the stage with standard lamps and old Christmas tree bulbs. Not my cup of tea, but they put on a great energetic show and looked like a Headline act should – tips could be taken mmmmm?

Sunday brings even more rain, and associated mud. We make or way to the press area for some respite, but eventual I have to call the shots and head home for fear that my chariot would become lodged in the soggy wastelands.

I have had a fun ol’ time, and owe it all to Roland and the team for all your help and hospitality. 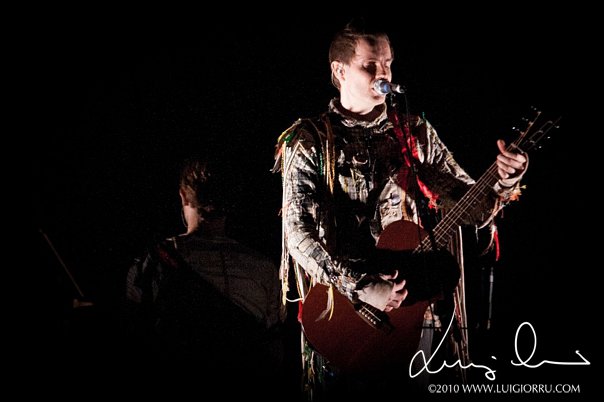