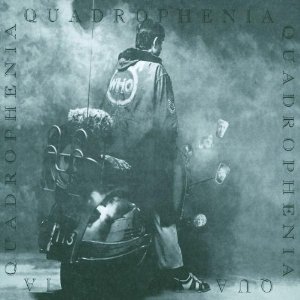 A stunning ‘Director’s Cut’ of the landmark 1973 album produced, authorised and overseen by Pete Townshend.

After the 1971 album ‘Who’s Next’, Pete Townshend returned to the ‘rock-opera’ concept, so dramatically realised through ‘Tommy’, with another ambitious double-album masterpiece. Based around the story of Jimmy – QUADROPHENIA tells the tale of a young mod and his struggle to come of age in the mid-1960s.The story also takes its influence from the band’s early fans from the original mod era, and its themes of teenage angst and disaffection still resonate strongly today.

The project was intended to reflect the four characters of The Who and features some of Townshend’s most inspired, personal song-writing – way ahead of its time in scope and purpose.

This is one of the most widely recognised albums of The Who’s career because of its classic depiction of mod culture, its renowned imagery and the magnificent music and powerful performances. The album is hugely significant in popular culture, influencing many other artists, musicians and film-makers – inspiring the classic 1979 British film by Franc Roddam and the UK ‘mod revival’ of the 1970s.

“This 2011 revisit to The Who’s 1973 Quadrophenia recording is inspired by current and continuing interest in the project,” explains Townshend. “The Who performed a concert version of the piece at the Royal Albert Hall in 2010 for the Teenage Cancer Trust with excellent reviews, and the success of that event led to the prospect of a Who tour in 2012 based on the album. The last such tour was between 1996-1997.”

The full details and track-listing for the forthcoming ‘Director’s Cut’ reissue of ‘Quadrophenia’ are released for the first time below and Pete Townshend has opened his personal archive for the very first time for the release, stating that:

“The time has come for me and my team to honour ‘Quadrophenia’ with a carefully presented package that features examples of the impact surround sound (quadrophonic) would have on the music, to remaster the vinyl mixes, and to collect and restore my demos. I am also going to try to shed some light on the way ‘Quadrophenia’ came about, and how it was inspired by events in my life in 1970 and 1971 when I scribbled or typed the very first notes and lyrics for some of the songs that made it onto the final record.’

‘Quadrophenia: The Director’s Cut’ will be the definitive version of the album and a must for any self-respecting fan of The Who and beyond.

· Discs three and four – 25 unreleased demo tracks from Pete Townshend’s studio archive giving a unique insight into the original vision for this remarkable body of work. Includes songs that were not included on the original album.

· Deluxe 100-page, hard-back book featuring a brand new 13,000 word essay by Pete Townshend, shedding exclusive light on the period before and during the creation of the album, explaining some of the technical processes – the startling and progressive use of synthesisers as well as a revealing insight into the story of the album’s central character – the mod Jimmy.

· Also features Pete’s in depth, track-by-track guide to the demos and a revealing studio diary.

· The package also replicates the striking black and white imagery from the original vinyl LP photography and adds never-seen colour out-takes of the famous cover shot.

I Am The Sea
The Real Me
Quadrophenia
Cut My Hair
The Punk And The Godfather
I’m One
The Dirty Jobs
Helpless Dancer
Is It In My Head?
I’ve Had Enough

Disc five – DVD – 5.1 surround-sound mix
I Am The Sea
The Real Me
Quadrophenia
I’ve Had Enough
5.15
Dr Jimmy
The Rock
Love Reign O’er Me

To accompany the box set, double vinyl, 2-disc digi-pak and digital versions will also be released.