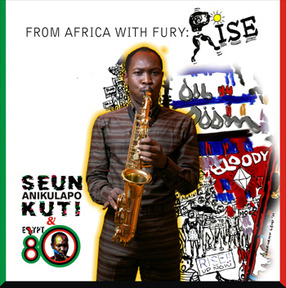 Nominated for a MOBO Award for ‘Best African Act’ 2011

‘If Seun and Egypt 80 are performing near you, just get yourself in there’

After the acclaimed release of his latest album ‘From Africa with Fury: Rise’ (Because Music) and his rave appearances at the Royal Festival Hall and on BBC Later with Jools Holland earlier this year, Seun Anikulapo Kuti returns to the UK for two live appearances this November.

Seun Anikulapo Kuti will be appearing with his fourteen-piece band, Egypt 80, on the following dates:

The success of Seun’s recent activity in the UK has resulted in a MOBO Award nomination for ‘Best African Act’. The results will be annouced at the MOBO Award ceremony in Glasgow on the 5th October 2011

In addition, Seun Kuti will release the blistering ‘Rise’, his first single from the album, on the 7th November. The package features a remix of the track by the US DJ and rapper, Swizz Beatz.  On ‘Rise’, perhaps the album’s most unequivocal battle cry, Kuti impels listeners to fight “the petroleum companies” that “use our oil to destroy our land,” “the diamond companies” that “use our brothers as slaves for the stone,” and “companies like “Monsanto and Halliburton” which “use their food to make my people hungry.”  But where Fela’s work often featured an explicit call to revolution, Seun’s goal is subtler.  He sees his role as that of an educator, speaking truth to power in order to provoke awareness and debate throughout his beloved homeland.

“In Africa today, most people are struggling in silence,” Seun says.  “The systematic oppression of the people has made them blinded to their reality.  Everybody’s just thinking about survival.  Nobody wants to stand up for anything, everybody just wants to tow the line.  So I’m trying to make people think about these things that they are forgetting.  I want to inspire people to want things to change.”

The youngest son of legendary Nigerian Afrobeat musician Fela Kuti, leads his father’s former band Egypt 80 and effortlessly makes live again the most original incarnation of Afrobeat. Seun began playing saxophone at age 8 and started as a backup singer for his father in Egypt 80 at age 9. He took over the band at age 15 after his father’s death. Since then, Seun has continued his father’s political and social message while adding his own perspective. “I want to make Afrobeat for my generation,” he says. “Instead of ‘get up and fight,’ it’s going to be ‘get up and think.’”

His latest album “From Africa With Fury” which came out this April was produced by Brian Eno, John Reynolds, and Kuti, with additional production by Godwin Logie.The critically acclaimed album captures Seun and Egypt 80’s extraordinary power, fraught with the scorching rhythms and kinetic funk energy that has earned the band – as ever, under the leadership of alto saxophonist Lekan Animashaun – worldwide acclaim as one of today’s most incendiary live acts.

“This is what Afrobeat is all about – and it’s the album Fela’s fans have been waiting for since his sad death in 1997.” Record Collector *****

PRIMAVERA SOUND SETS UP A NEW FESTIVAL IN PORTO