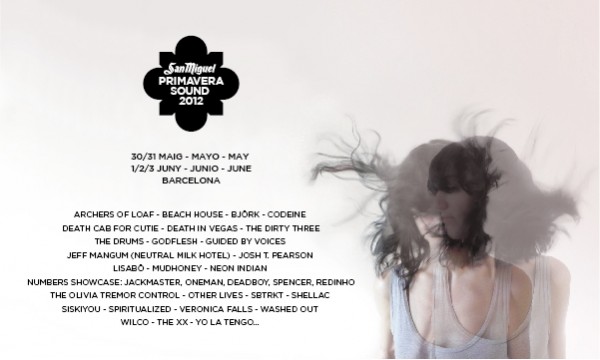 THE XX, DEATH CAB FOR CUTIE AND SPIRITUALIZED AT PRIMAVERA SOUND 2012

The Americans, Death Cab For Cutie, one of bands most in demand with audiences in our country, The XX presenting their eagerly awaited second record, the band led by Jason Pierce Spiritualized with a new album, the instrumental rock of Warren Ellis’ band The Dirty Three and Beach House, the band whose popularity has been fostered by the festival, are some of the new additions to the line up of the two editions of Primavera Sound 2012 in Barcelona and Porto.

Siskiyou, who will come from Canada, will also be present at both festivals with their folk pop, and a showcase by the British label Numbers that will include DJ sets by Jackmaster, Oneman, Deadboy, Spencer and will include a live act by Redinho will reinforce the line up’s electronic music input.

The Barcelona edition San Miguel Primavera Sound will welcome the Basques Lisabö, one of the bands most loved by our most faithful audience, who will bring their new album and give one of their first concerts after a long time off the circuit.

The Texan band Explosions In The Sky, currently one of the banners of post rock sound will join the line up of Optimus Primavera Sound in Porto only.

The full festival ticket for Optimus Primavera Sound in Porto costs 75€ (+ booking fee), until the 31st December. The sales points are Ticketline, Ticketmaster, Seetickets UK and Paypal. They can also be bought on our Facebook page and shortly in Optimus shops. More information about points of sale at www.optimusprimaverasound.com.

The full festival ticket for San Miguel Primavera Sound in Barcelona will cost 160€ (+booking fee), until tomorrowAdd an event for tomorrow Thursday 1st December instead of todayAdd an event for today Wednesday 30th November as initially planned. From the 2nd December the full festival ticket will cost 170€ (+ booking fee). The sales points are Codetickets, Atrapalo.com, Servicaixa, PayPal, Seetickets UK and the CD Drome shop. They can also be bought on our Facebook page and in through the Accommodation section of the festival website. More information about points of sale at www.primaverasound.com.

Reserve your accommodation for San Miguel Primavera Sound 2012 now in some of the hotels close to the Parc del Fòrum in Barcelona now and enjoy special rates. Make your reservation at hotels.primaverasound.com. To enjoy this special offer, a minimum 3 night-stay is required (31st May-2nd June). You can also purchase your full festival ticket in one and only transaction.