THE BEVIS FROND – The Leaving Of London 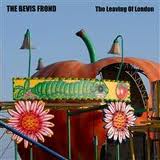 The Bevis Frond is a British indie classic rock group with a numerous back catalogue on various independent labels since the 1960’s.

The Leaving Of London is their 20th album after a 7 year gap.  It’s mixing of punk, folk and psychedelia makes it reminiscent of Hendrix, The Kinks, The Byrds and Elvis Costello.

With a familiar and welcoming feel, this album is the length of old-fashioned double album and has some beautifully played and personally inspired songs. There’s great variety and a delicate balance between the songs which convey a melancholic, brooding frustration and those which are hard, energetic and up-tempo.  Amidst the fun, humour and idiosyncrasies, there’s some excellent guitar work. This is a refreshing and underrated album by this long established and eccentric but relatively unknown cult band.