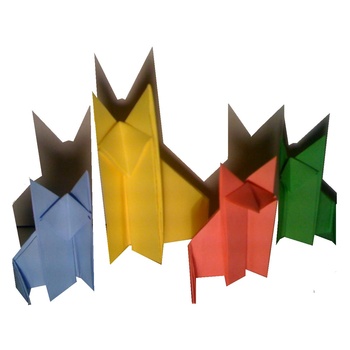 Dead Wolf Club release their self- titled debut album on February 1st 2012. The band is comprised of John Othello (vox/guitars), Alwin Fernandez (guitar), Martha Supajirawatananon (bass), and Serra Petalle (drums) who apparently met on a flight to Paris. Two years later they have formed a band and have signed to new label Scene Not Herd Records.

According to their webpage Dead Wolf Club specialize in “loudness, quietness, darkness and light.” To be honest I cannot hear much quietness in their music which is alternative rock with a decisive punk influence.

The album is opened with Headful of Horrors which will presumably be a second single from this album as it is one of their most commercial tracks. This song gives an introduction to the sound of Dead Wolf Club who have encapsulated the punk/grime sound that we have heard from many UK bands in the past number of years. It is a very raw rock sound where the guitars are loud, drums are crashing and the vocals are angsty and emotional while occasionally descending into “screamer” style.  First of all Dead Wolf Club will offer their fans a free download of their track “Radar” a guitar focused track that is characteristically loud with a catchy chorus.

“Wave” shows a slightly toned down version of Dead Wolf Club, the melody is a melancholy and even, allowing the guitars to really do the talking while the drums keep it from becoming a downbeat track. At times I hear a touch of The Cribs in Dead Wolf Club, in songs such as Colossus and Creatures which are powerful, energetic tracks that beg to be played live- as does much of the album.

Nerina Pallot – All Bets Are Off