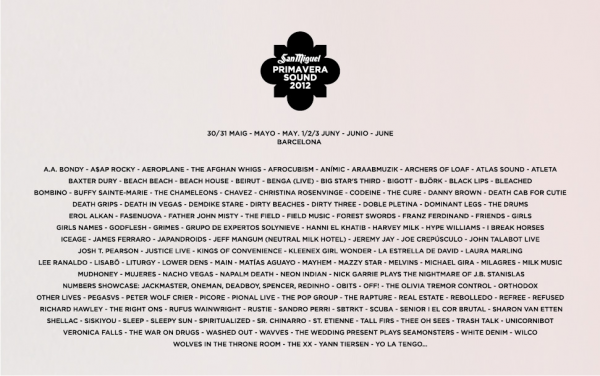 Rufus Wainwright, Refused, The Rapture and Kings Of Convenience, among the new confirmed artists.

The festival will offer two days of free concerts in the Arc del Triomf, under the umbrella of Primavera a la Ciutat.

This morning San Miguel Primavera Sound presented their twelfth edition, that will take place from the 30th May until the 3rd June in Barcelona. The most significant novelty is the expansion of Primavera a la Ciutat which will considerably increase its scope this year with a new concept, a large-scale event open to all the people of Barcelona. The promenade Lluis Compants around the area of the Arc del Triomf of Barcelona will be the venue for two days of concerts for the inauguration and closing days of the festival, on the 30th May and 2nd  June respectively.

Several national and international artists will perform on this historically charged emblematic site, amongst them will be the composer and multi-instrumentalist Yann Tiersen, the Californian, resident in Berlin, Jeremy Jay, the British band Saint Etienne, who will present their first studio album in seven years, and The Wedding Present who will play their record “seamonsters” integrally.

The arrival of the touring show of concert posters Flatstock will be another of the novelties of the next edition. This unusual proposal, that will on the Parc del Fòrum site during the days of the festival, devoted to the work of 30 artists, will be the biggest exhibition of this type to visit Europe. The public of the festival will have the opportunity to enjoy an encounter between music and the most underground of plastic art form.  The fair will be complemented by a free exhibition as part of Primavera a la Ciutat, from the 15th May until the 3rd June in the Virreina Centre de la Imatge where a selection of 50 works chosen by Flatstock as well as some posters by renown Catalan artists will be on show.

In the artists’ section, on the extensive list of those confirmed as of today we can highlight the presentation of the new record ( a return to pop with Mark Ronson producing) of the American singer Rufus Wainwright, a comeback by the mythical Swedish hardcore band Refused, the New York band The Rapture with their danceable post punk and Erlend Oye’s band Kings Of Convenience with their intimist folk pop.

Other bands that have been making a noise lately will also be in Barcelona. Pop from the California band Girls, the new solo project of Bradford Cox (Deerhunter) under the name of Atlas Sound, the British crooner Richard Hawley, from Beirut pop with echoes of world folk, the new garage from the Black Lips, the female voices of Sharon Van Etten and Laura Marling, American rock from The War On Drugs, the high volatge punk pop of the Wavves, the convincing psychedelia of Thee Oh Sees and the overpowering duo Japandroids.

Artists with extensive career and influential formations who have made their mark on the history of music today have always had a space in the Primavera line up, and this year the prescence of the British band The Chameleons, the mythical post punk band The Pop Group, the cult ambient of Main, the freontman of Swans Micheal Gira and the integral performance of the record “The Nightmare of J.B. Stanislas” by Nick Garrie with a string section really stand out.  Also worth a mention is the project “Big Star’s Third”, in which a band formed especially for the occasion by  Jody Stephens (original band member), Mike Mills (REM), Chris Stamey (The Db´s), Ken Stringfellow (Posies), the well known producer Mitch Easter and Brett Harris will tackle Big Star’s thrid album with an extensive list of singers amongst whom Norman Blake (Teenage Fanclub), Ira Kaplan (Yo La Tengo) and Alexis Taylor (Hot Chip) have confirmed as of today.

New blood feeds the festival  every year, and this year is abound with new proposals like the unclassifiable James Ferraro, the British Girls Names, rock’n’roll from Hannii El Khatib, the northern iciness of Iceage, shoegaze from  I Break Horses, the hard sounds of Trash talk, the Americans Lower Dens, the member of Fleet Foxes Father John Misty and the band formed by ex members of Mika Miko Bleached. Bands like Dirty Beaches, Milk Music and Friends will also visit the twelfth edition of the festival.

The national section is as extensive as it has been in other years and this year the Granada band Grupo de Expertos Solynieve will present their new album, Christina Rosenvinge will look back over her career with her band, Bigott from Zaragoza will defend one the records of the years and an exclusive performance by the Catalan Refree for the festival, which will include tracks from his ten-year-career. La Estrella De David, The Right Ons, the duo Atleta and revelations like Doble Pletina, Beach Beach and Unicornibot will also be playing on the stages of San Miguel Primavera Sound 2012.

The electronic music section of the line up is headed by the famous DJ and producer Erol Alkan and live acts by the aces of bass masic and breakbeat: Rustie and Benga. John Talabot from Barcelona is another of the great attractions of this edition and will play his debut album live, Pional from Madrid will also be there, another national artist who is triumphing Spain. Aeroplane, The Field and another name of the moment, the Britsh artist Scuba, are some of the more danceable attractions of the festival.

All Tomorrow´s Parties continue to bring some of the riskier proposals to the festival in 2012, amongst which there will be the visit of Lee Ranaldo (Sonic Youth) presenting his new solo album, the experimental electronic music by Demdike Stare, the North American band Tall Firs on the prestigious label Static Peace!, and the power trio Shellac, the house band.

As the festival does not live on pop and rock alone, that week there will also be performances by hip hop bands like Danny Brown and Death Grips, desert rock from Bombino and the fusion of African and Centro African sounds of Afrocubismo in what will be one of their last concerts.