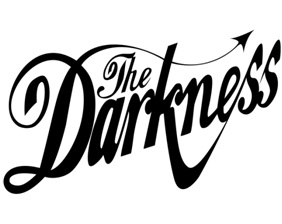 Ending months of speculation and bated breath, on 1st February 2012 The Darkness will unveil the first fruits of their recent studio labours.

Intended as a big “cheers” to fans who have been waiting so patiently since the band last released new material (back in 2006), and who have responded so enthusiastically to the end of the hiatus by buying enough tickets to sell out tours on both sides of the Atlantic, the track – entitled ‘Nothing’s Gonna Stop Us’ – will be made available to download for free at 2pm via www.theactualdarkness.com.  The song was recorded and produced by the band and Nick Brine in Norfolk and mixed in Austin, Texas by Chris ‘Frenchie’ Smith.

An accompanying video has been created in Philadelphia by artist Thom Lessner and director Ted Passon and will be unfurled on the same day. Believe us when we say, it’s worth the wait.

By coincidence, 1st February is also the date The Darkness begin their first North American tour since 2004; starting with a sold out show at Toronto’s Phoenix venue.

For those who are not sure what to expect, let us point you in this direction: http://youtu.be/4t5aOdDIXJ4

The band have already announced appearances at the Isle of Wight Festival on Sunday 24th June (headlining the Big Top Stage) and play their first ‘local’ outdoor show in Thetford Forrest on the 14th July.  More UK dates and album news to follow soon.

For the avoidance of doubt, The Darkness remains: