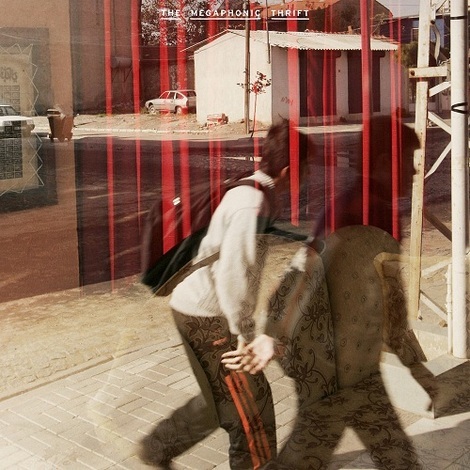 To be honest, I hadn’t heard much from The Megaphonic Thrift before – their debut ‘Decay Decoy’ seemingly passed me by. So this, their self-titled follow up, has acted as my introduction to the Norwegian indie quartet, who are often touted as a sort of supergroup, since the band features members of Casiokids, Young Dreams, and Low Frequency In Stereo. To get to the point: The fact that I missed their debut, and haven’t heard much from The Megaphonic Thrift, has made me very sad, because I’ve clearly been missing out on something very special.

There is a range of influences on ‘The Megaphonic Thrift’, but it has a noise rock verging on noise pop skeleton. The album as a whole has real, sonic depth, and manages to perfectly balance aggressive post-punk and dream pop to produce something that is both melodically memorable but excitingly experimental. Take opener ‘Tune Your Mind’, which has a looped, post-punk drumbeat, layers of distorted noise, and some intermittent, squealing, jazz-like guitar solos. But, at the same time, it has layers of sweet and harmonious vocals, the Linn Frøkedal’s femininity aiding and abetting Richard Myklebust’s masculine, punk-rock delivery. This ‘shoegazing’ vocal dynamic is what makes the wall of noise music of The Megaphonic Thrift sufficiently accessible, and many of the melodies are incredibly fine, such as on the Frøkedal-led ‘Moonstruck’.

There are also countless moments where the band delve into more psychedelic rock territory, with songs like ‘Raising Flags’ sounding like a more upbeat Tame Impala. In general, the effects-laden guitar work strives for the kind of intense, distorted noise that bands like My Bloody Valentine and Sonic Youth perfect many moons ago, but The Megaphonic Thrift also manage to preview ear-friendly guitar hooks amidst the raucousness. More understated tunes like the (slightly) restrained ‘Kill, Breathe And Frown’ – which actually starts off sounding a little like Death Cab For Cutie – and the hypnotic acoustic ballad ‘I Wanted You To Know’ show that the band don’t need to rely on erratic noise and effects to make captivating indie music.

The album highlights are ‘Fire Walk With Everyone’, which is a straight-ahead post-punk tune with the most memorable male-female vocal harmony, and the downright sinister guitar tones of ‘The Guillotine’, which sounds like The Megaphonic Thrift were asked to soundtrack a cruel scene in an horror film.

This album contains just the right amount of pop, experimentation, and indie-rock structuring to result in an undiluted success. Apparently The Megaphonic Thrift are even more alluring live, and to overcome my current sadness for having missed out on this band for the last couple of years, I will find out their next London live date, and then dream about their live show every night until that date.

Kiros – Lay Your Weapons Down