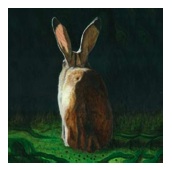 British avant pop artist Alexander Tucker releases his much anticipated new album, Third Mouth, on Thrill Jockey on April 2nd 2012. This album builds on the strengths revealed by his landmark debut for the label, Dorwytch released in April 2011, culminating in his finest work to date.

Using songs written over a 12 month period he achieves his own inimitable blend of psych rock and ambient pop using a variety of studio crafted effects, rudimentary beats, guitar and bass, as well as synth and cello drones. He pushes himself even further however as he breaks new ground on the electronics only track “Rh” and heads further out into the deeper reaches of space with the sci-fi influenced cosmic meditation “Andromeon” as well as experimenting with more progressive song structures like those in “The Glass Axe”.