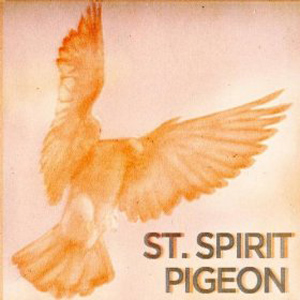 Titles are an odd thing when you think about it, things are given names to differentiate them from other things and, in the world of pop, give you some indication of the kind of content that might be found within, Reign In Blood could only be a thrash metal album, Girls, Girls, Girls could only be a hair metal album (Funny how these are all metal albums…), but Crystal Palace “Choral Post rockers” (There’s a label to run from) St Spirit are just confusing, they’re called St Spirit, which brings to mind epic anthemics, the E.P is called Pigeon, which makes me think of twee indie pop and the song titles (Sweat, Tooth and Nail) makes me think of the kind of post grunge a professional wrestler would work out to. Then I press play and what comes out is… relatively epic sounding indie rock. I wish I could get a hold on you St Spirit, I really do. Is it good? Yeah it’s alright, it’s well made, relatively unique and the songs are reliably huge, the opening title track especially. So St Spirit have a sound, only an idiot would say otherwise, but is it a sound or is it a formula? Going by the E.P, it’s worryingly like the latter.

Every song is carried at the same sauntering pace; moodily building tension that is never really cut, with singer Myles McCabe self-consciously over emoting in a way that would make Johnny Borrell wince. Sweat quite effectively is quieter than most tracks, built around McCabe and an acoustic guitar with his band making only the most subtle noises in the back ground. But it’s not the records stand out moment, in fact this E.P doesn’t have one, please let me justify this. The songs are all of a distinct quality level, and this is actually better than having one stonking track on an album of filler (and vice versa for that matter), it’s just that, for this particular E.P, this level of quality, for this reporter, is not that high. What makes it even worse is that this is the year that Sigur Ros make their comeback, and choosing between this and them is like the choice between a hotel bed and your own bed, if you really have to find out what every other bed in the world is like, go with the hotel bed, but when it comes down to it, you’ll always go back to your own.