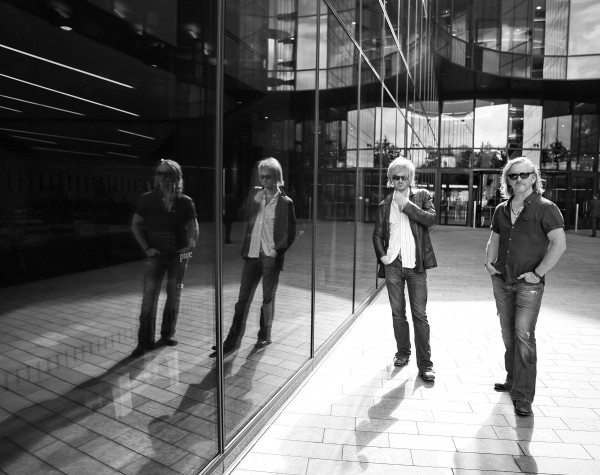 AAAmusic: Your new album ‘New Church’ is a brilliant piece of work. Can you tell us a little about the writing and recording of it?

Paul: We started Writing the songs for New Church almost immediately after the release of Outlaw Heaven ,I am always writing songs anyway I, could be watching the most banal program on TV and a simple phrase said by some fictional soap character could start me running into some deep thought process e.g. How many bullets was a phrase I heard on some TV programme lot of the time I don’t know what the songs are about until they are written, I’ll just keep plucking words or phrases that appeal to me From newspapers or TV or a conversation I’ve overheard until it builds up sufficient energy in my mind then I,L start to write it down along the way it will cross paths with some musical riff either myself or Charlie might be fiddling about with. Occasionally you get lucky and it all comes in one hit e.g. a little more each day. Most of the tracks were recorded in Charlie’s Home studio(bands guitarist)although when funds would allow it we would record a basic track as a band in a studio with a big live room then take it back to Charlie’s where himself or Will (our drummer)spend a lot of time fine tuning the arrangements

AAAmusic: You have said before that rather than making “Irish Music”, you think The Popes’ music just contains an “Irish-ness” – is that the same of ‘New Church’?

Paul: Yes it’s something I’ve spoken about before it’s not Irish music in the trade sense but the songs are very Irish in the same way that bands like Thin Lizzy or artists like Van Morrison are .My command of English was mastered in Dublin in a language I think they now call Dublinese (I hope they are taking the piss) I was also educated by the infamous Christian Brothers you can take the boy out of Ireland but you can’t take Ireland out of the boy.

AAAmusic: I know bands hate categorising themselves, but what kind of musical genres have influenced you as a songwriter?

Paul: I’m getting on a bit so there a lot of things that have influenced my songwritting over the years I’ve been Influenced by sixty’s soul by Hawkwind and the Pink Fairies and Iggy, T.Rex, Bowie and all the great punk bands like the Clash not to mention Little Feat, Tom Waits, Public Enemy R.E.M., at this stage the musical part of my Brain is one large melting pot.

AAAmusic: Is it right you began writing the songs for your last album – ‘Outlaw Heaven’ –  in prison, with limited access to stationary and instruments?

Paul: When I left Prison in 2005 I came out with a clear plastic bag full of blue prison paper that’s all. I was allowed 3 sheets a week; this was a very creative time for me as there was lots of time to kill, so my writing got smaller and smaller as I found myself running out of paper. There was no musical instrument allowed so when I heard that there was a folk mass on Sundays with a guitar playing priest I signed up and was first in the Q every week in the hope that I could get a bang on his guitar and see how my songs were coming along…

Thank heavens for the folk mass.

AAAmusic: That must have been a pretty intense initial writing process, and could arguably have led to the eventual shape and tone of that album? How big a creative difference did having freedom and infinite resources bring to the initial writing of ‘New Church’? For example, are there any new or different themes underlying the lyrics?

AAAmusic: Is there anything you would have done differently in the creation of ‘New Church’, which you produced yourselves, given the chance?

Paul: Ideally I would like all the songs to begin their life recorded in a big live room with the full band playing, once we’ve got a good performance down Its good to take the songs home and work on them, the mixing would take place as we go along, this rarely happened with Outlaw heaven as I recorded most of the songs on acoustic guitar and a click track. On New Church we got to do this when Money allowed the luxury of a big studio so on the new album this was about 50% of the time. We’re hoping it will be the norm on the next album which we have already started.

AAAmusic: What was in like working with Howard Marks, who makes a guest appearance on ‘Throw Down Your Aces’ – and how did the collaboration come about?

Paul: I’ve been a fan of Howards since reading the newspaper clippings of him in the 80’s. I was fortunate enough to meet him in the late 90s when he came to one of our gigs. Howard is a great storyteller and the first thing that struck me was the beautiful tone of his voice, that and his ability to make you feel he is talking exclusively to you even if he is holding court to  a large crowd of people. We met again at the Beautiful Days festival in 2010 thru mutual friends. When Will wrote the intro lyrics for Aces we knew it was perfect for Howard. It was a very organic collaboration and had fun working with him.

AAAmusic: The Popes founder and former frontman Shane MacGowan (of The Pogues) appeared on ‘Outlaw Heaven’ – were there no plans to collaborate on your new album?

Paul: I’ve had a great time working with Shane over the years and although there’s no plans to work together at the moment I’m sure we will again. There would be no point in having Shane on just to notch up a few extra album sales. When we recorded Outlaw Heaven we knew some of the songs would be perfect for his Vocals. On the new album that wasn’t the case. These things should happen naturally.

AAAmusic: You’re doing a pretty extensive UK tour supporting The Stranglers. I imagine The Popes are fans of The Stranglers, but have they influenced your band at all?

Paul: I should say so I first saw them in 1978 at Trinity College Dublin and they blew me away. They were always a bit more articulate than the average punk band and I was struck by their sense of commitment.

AAAmusic: Are there any plans for a full UK headlining tour?

Paul: We plan to do our own U.K tour in October.

AAAmusic: Have you been confirmed to appear at any UK festivals this summer?

Paul: we have festival appearances all over Europe but so far in the U.K we’ve confirmed the Bearded Theory festival in Derby on May 19th and the Watchet Festival in Somerset on Aug 26th. We are waiting to confirm a few more

AAAmusic: It may be a bit too early to ask, but are there any plans to make another record after you finish touring ‘New Church’, and if so, will you be continuing along the same path or trying something exceptionally different?

Paul: As I’ve said earlier we are already working on the next album.. If you listen to the POPES first album Holloway Boulevard thru to Outlaw Heaven to the latest New Church you can see the progression and where we are heading I don’t think we’ve made the ultimate POPES album yet but we are close.

A Chat With Ronny Moorings of Clan of Xymox