Future of the Left to release new single on 12th March 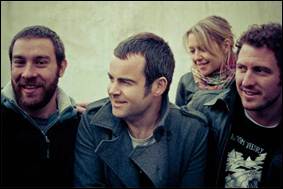 Future of the Left are pleased to announce the release of their brand-new-outside-of-their-own-heads single ‘Sheena is a t-shirt salesman’, which is taken from their forthcoming Xtra Mile Recordings (Frank Turner, The Xcerts, Against Me!)-released album ‘the plot against common sense’.

Released on 12th March, ‘sheena…’ is approximately 125 seconds of semi- aroused rock band engaging fully with their instruments and shouting a lot, sometimes deliberately. Casual listeners are invited to enjoy it or leave the building.

The song is taken from the previously mentioned long-playing collection ‘the plot against common sense’, which is to be released on 28th May. Constituting 49.8 minutes of singing, shouting, slinking, smashing and (at times) sobbing, the album is the best thing the band have put their name to in this or any other dimension, a fact which is not open to debate.

In March, the band will be playing at the South By Southwest festival in Austin, Texas (the Xtra Mile Recordings showcase as well as other shows) and laughing at the identical tattoos which dot the streets like anti-establishment Coke machines. A UK and European tour is scheduled for June.

Bravestation release ‘Signs of the Civilized’ on free download