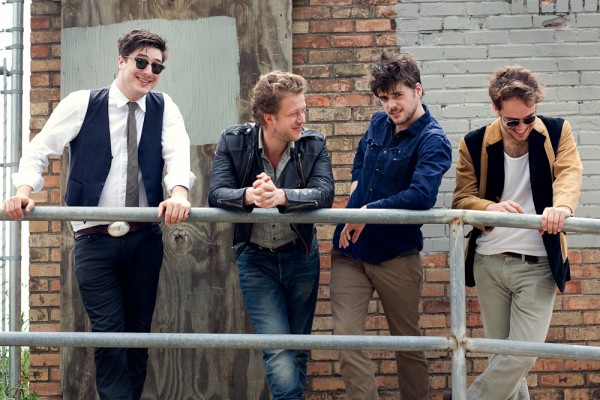 Mumford & Sons are pleased to announce details of a series of ‘Gentlemen of the Road Stopover…’ shows this Summer.

The one-day, outdoor events will tour globally, kicking off in Greenhead Park, Huddersfield (UK) on Saturday 2nd June, followed by Salthill Park, Galway (Ireland) on Saturday 9th June.
Both shows will be headlined by Mumford & Sons, and will feature full bills of support acts curated by the band themselves.
Mumford & Sons said: “The Gentlemen of the Road Stopover is based loosely upon our favourite festivals like Colorado’s Telluride Bluegrass and Scotland’s Loopallu Festivals. We want to stop off in towns not usually heavily toured by bands, and celebrate the people, food and music that inhabit them. We’re keen to promote the town’s local businesses, and we’ll be using the local bars and venues for aftershow parties, whilst working closely with the local people to get everyone involved in making these shows spectacular. There will be a host of our friends playing too, and the vibe falls somewhere between ‘travelling Victorian circus’ and ‘Victorian travelling circus’. It should be a whole lot of fun.”
All of the Gentlemen of the Road Stopover shows will heavily involve the local communities, from the produce sold on the sites, to engaging visitors with the towns as a whole.
The band will also play a series of evening gigs preceding and between the Stopover shows, with the support acts selected from the Summer show line-ups.
Tickets for all dates will go on pre-sale through Musicglue.com and local outlets from 9am on the 20th April, and on general sale from 21st April. Tickets cost £49.50 (Huddersfield), €45.00 (Galway), and £23.50 for all other dates.
Gentlemen of The Road Presents:
30th May – St David’s Hall, Cardiff
31st May – Leas Cliff Pavilion, Folkestone
2nd June – Gentlemen of the Road Stopover In Huddersfield – Mumford & Sons + Michael Kiwanuka, Willy Mason, Nathaniel Rateliff, The Correspondents
4th June – The Apex, Bury St Edmonds
5th June – Marina Theatre, Lowestoft
6th June – The Sage, Gateshead
9th June – Gentlemen of the Road Stopover In Galway – Mumford & Sons + The Vaccines, Willy Mason, Zulu Winter, Nathaniel Rateliff, The Correspondents

The Darkness to support Lady Gaga on European Tour