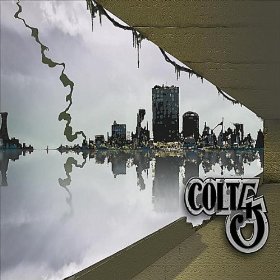 Sheesh. Listening to this, the debut E.P from Carlisle punks Colt 45, one might picture the entire Cumbrian tourist board waking up screaming at the thought that they might become successful. The vast majority of the E.P does not paint the North West of England as a particularly fantastic place, fuelled as it is by small town frustrations, dreams of escape and the open road that aim for Springsteen/Gaslight Anthem-esque eloquent hopefulness but instead, and I sincerely mean this as a compliment, harks back to the dignified yet clumsy rage of The Enemy’s first album. For all that however, I would never have actually known they were from Cumbria, or England at all for that matter, if it wasn’t for them repeatedly saying so. So I think the Cumbrian tourist board can sleep easy from now on, knowing that this particular export sounds so completely and utterly anonymous, few will ever be able to trace their rage back to them in particular.
And that is the problem with this E.P, it sounds bland, uninspiring and unimaginative. Sure, it’s effective sometimes, and it’s never outright bad per se, closing tracks These Unspoken Arguments and Six Month in Chino especially hark back to prime Alkaline Trio and Social Distortion frontman Mike Ness fronting early Green Day, but neither tracks are as good as their influences, so why listen to something that nearly sounds like prime Alkaline Trio but isn’t quite as good, when you could just listen to prime Alkaline Trio? In all this is decent enough, it won’t change your world or destroy it, it’ll probably sound awesome live but unless they can take their more esoteric influences like Million Dead, Fugazi and At The Drive-In (proudly stated on their Facebook) and actually sound like them while keeping their undeniable pop smarts, we might have something special on our hands. As it is though, give it a spin if you must, but bear in mind there are three new Green Day albums coming out in the near future, and all three of them will be better than this. Fact.
★★★★★