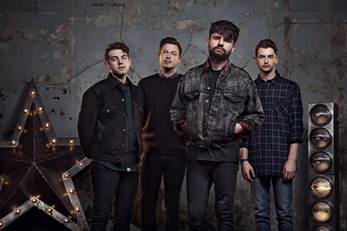 As announced on stage at their monumental Download 2012 performance, the brilliant Watford 4 piece LOWER THAN ATLANTIS can now finally reveal the first details of their brand new studio album ‘Changing Tune’. The album will be released on September 17th through Island Records, is produced by John Mitchell (Enter Shikari, Architects, You Me At Six) and was recorded at Rockfield Studios in the early part of 2012.

Mike Duce, vocalist, front man and guitarist of LTA: ‘’Everything we’d done up until now had been rushed, on a shoestring budget and against the clock. With this album, we had the facilities and the time to use them to our advantage to create something really great. We could literally work all and any hours we wished, whereas before we’d have to force creativity out between 10-6, which didn’t always happen.’’

Mike adds that working at the legendary Rockfields really added something extra to the album, in more ways than just the conventional; ‘’As horrible and cliched as it sounds, we definitely used the studio as another instrument but without losing the vibe of a rock band playing live. Recording in such a prestigious studio acted as a muse and was inspirational beyond belief. We’ve never been happier with a collection of songs and we hope you enjoy listening to it as much as we did making it. If not, it could make a pretty sick coaster for your tea or something…’’

The track listing for ‘Changing Tune’ is as follows:
1. Prologue
2. Love Someone Else
3. Move Along
4. Wars With Words
5. Go On Strike
6. Normally Strange
7. Scared Of The Dark
8. Something Better Came Along
9. PMA
10. Cool Kids
11. I Know A Song That Will Get On Your Nerves
12. Showtime

As also announced at Download, LOWER THAN ATLANTIS will be heading out for an October UK headline tour, with support coming from The Dangerous Summer, Don Broco and Transit.

Reverend and the Makers – The Wrestler

Shoes And Socks Off – Miles Of Mad Water