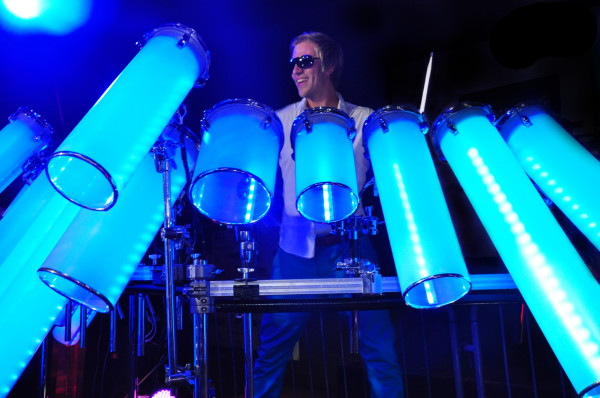 These revolutionary ‘DJ drums’ have been hand-built by former Britain’s Got Talent (BGT) star, Michael Fish.

He made them out of parts from high street DIY and electronic stores.

These revolutionary ‘DJ drums’ have been hand-built by former Britain’s Got Talent star, Michael Fish.

Michael, now known as Afishal, designed and manufactured the ground-breaking instrument himself using skills he learned as a pupil at Colne Valley High, Greenhead College and Huddersfield University.

The DJ drums allow him to perform live music and can be programmed to play any sound or sample on his laptop.

The 16 drums also light up when struck and can be customised with different colours.

Afishal said his creation had already sparked massive interest in the music industry with chart topper DJ Fresh reportedly offering to buy them off him.

“They’re built for festivals so there’s something visual for the fans to follow at the same time as the music.

“I came up with the idea that you could drum with ‘sounds’ rather than just drums.

“But I love creating things and then stepping back and admiring all the hard work.

“My dad taught me how to make things from a young age and that’s what’s inspired me to come up with new drums.

“I was the first to attach flashing lights to my drums and then I came up with the wireless LED bongos which I’ve used in the VIP areas of London clubs.

“But everyone keeps copying me so I said right, I’m going to make something people can’t copy.

“Hopefully this will give me a headstart of a year or two.”

He had the plastic cylinders custom made and then self built the electronic and software system that links each drum with the lighting and the DJ equipment.

The drum heads were even customised using foam from baby mattresses, following a recommendation from his mum.

“If it sounds good and it looks good, you’re on to a winner!”

Now based in London, the former Golcar resident is heading back to Huddersfield on Friday to show pupils at his old school his magnificent creation.

He will join a music technology class at Colne Valley High School before heading over to BMW dealer on Leeds Road to launch a new car.

Afishal said he had a number of exciting opportunities ahead of him, including linking up with former pop star Abz from 90s group Five for some UK gigs, and performing on his own coast-to-coast tour of the USA.