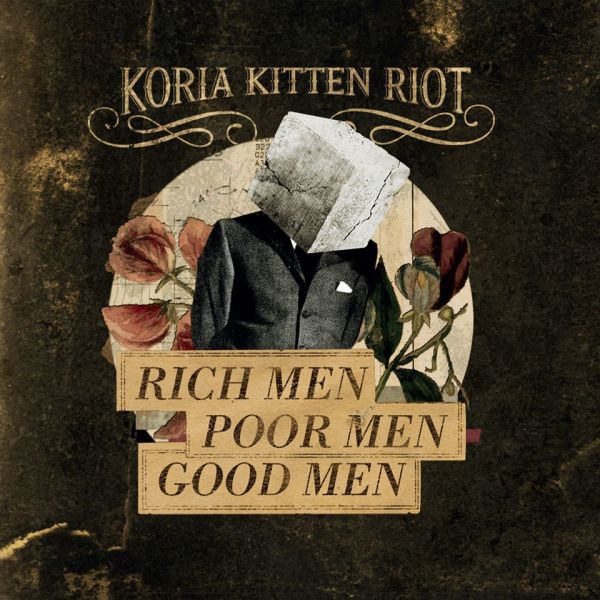 Koria Kitten Riot can be described as an indie-folk-pop quintet from Helsinki who bring an album with lots of interesting content, if somewhat eventful, and at times complicated in terms of clearly hearing everything they serve up.

The album, Rich Men Poor Men Good Men, begins with a sudden outburst with a grungy surge of excitement in ‘Between A Pillow and A Soft Place’. Wait…this is overhauled with a sweet glockenspiel ostinato and classic folk/pop guitars. Instantly, we know this band have a taste for experimentation. There is a swift instrumental of swelling sounds all mashed up together like a painter throwing paint randomly onto a canvas but overall, after a few listens you realise that this is a quirky indie track with thoughtful lyrics.

‘The Lovers That You’ve Never Had’ is a classic gentle guitar driven song with harmonious chord progressions, conforming with the melodic vocal line. Scattered into the instrumentation are some more eccentric clippety-clop percussive effects making this a very charming track.

Why is it that every album seems to feel the need to include a cliché waltz with a music box inspired introduction? Actually, ‘A Last Waltz’ develops into a more acoustic and intellectual formation of metaphorical and artistic lyrics and there is a definite infectious energy created.

It is really refreshing to hear the acoustic and country influenced ‘Train Song’ which is purely beautiful in its simplicity and storytelling. For the first time Antti Reikko’s natural vocal ability smoothly narrates amongst the resonant slide guitar’s step wise passages and finger picking textures.  I had to play this track over and over just to emerge myself in its loveliness.

‘Cold Cold Arms’ begins again with the mix of simple acoustic writing and a random electronic effect sitting weirdly on top in a way that just spirals away with no relevance. However, this is a very poetic song that fuses a country ballad style with a soulful vocal timbre. This track toys with expectations in terms of where you think the song is moving to after nuances of various stylistic features from differing musical genres (I swear there is a single bar where the harmonic shift has been taken from a songwriting guide to Radiohead!)

‘Suits & Evening Gowns’ is a more outlandish performance with heavy rhythms, guitars and banjos and I can firmly say that at this point in the album, the bands personal sound has now settled in – it all seems more normal and tailored.

Another acoustic treat is crafted in ‘Sinners in the Sun’, with soulful electric keys and soft harmonies, quite gospel in effect. Following this is an inspiring acoustic track titled ‘Today’s Been A Beautiful Day’ with its own quirks and blemishes!

The final two songs, ‘Carpathia’ and ‘Where Good Men Used To Live’, bring this album to a peaceful close, encapsulating the talent of the songwriting and musical dabbling of the band’s instrumentalist. Thoughtful, reflective, unpredictable and differing genre themes are all cleverly sculpted together to create an album which needs to be carefully listened to in order to become aware of its splendour.

Thoughtful, reflective, unpredictable and differing genre themes are all cleverly sculpted together to create an album which needs to be carefully listened to in order to become aware of its splendour.