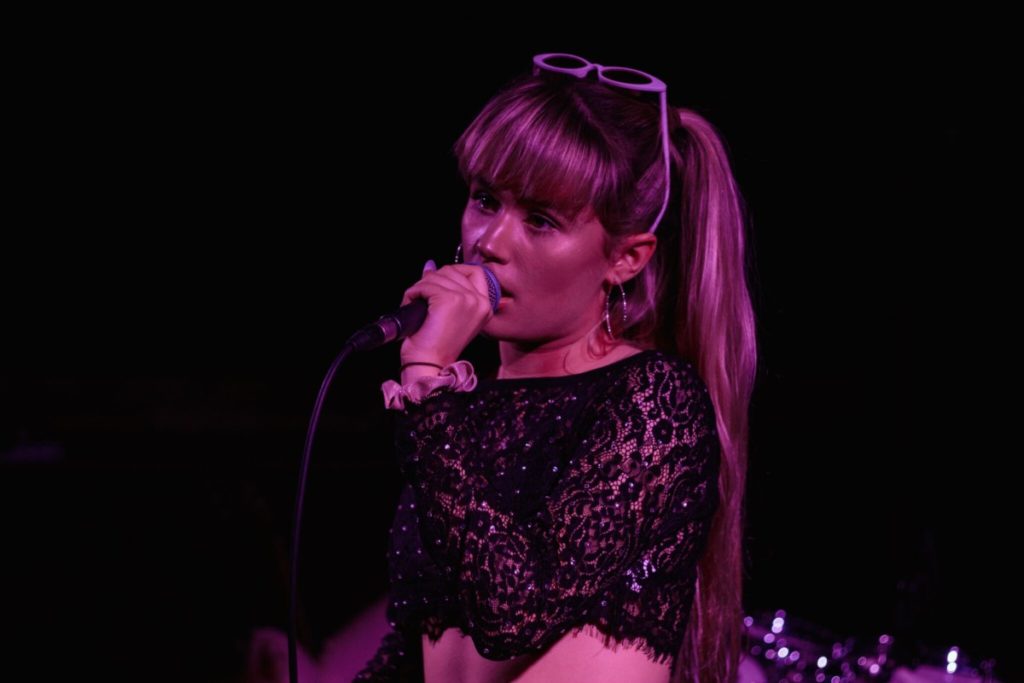 I’m Hana and I come from a small sea-side village called Sully in Wales – in Welsh it’s also called Sili. I’m the youngest in the village by far, I was born in 2000; I think the average age is 76. I sometimes watch the residents play bowls, but mostly I escape to the city, and sometimes I party… HANA2K has been in the making for years, and I’m now coming out to play… I’ve always made music in some form, singing in the shower, playing flute, doing piano grades. and submitting songs instead of essays as school homework. In 2014 I uploaded my music to SoundCloud, my journey began from there really. Since then I’ve been writing continuously, collaborating, and enjoying every minute of that process.

I’m influenced by all sorts of music and music phases – I don’t always believe in genre, but I truly believe in good songs, if it’s Nirvana or Max Martin’s songs for Britney – if it’s good it’s good. I find making music a necessity, just a calling, if people want to listen that’s a major bonus, it goes hand in hand that if you make music and people listen, you’ll start to make more and more. That’s how I started I suppose, SoundCloud gave me a door to an audience from my bedroom, all of a sudden you have this audience, and some of them become fans, they interact with you on social media.

I’m not sure, I guess I made songs and put them up on the web, and people reacted, you get listens, and for me 100 was huge at the time, I got messages saying that my song made them cry, I think that’s so cool, you know not cool that they cried but cool that they felt the emotions that made me write the song in the first place. I once uploaded 6 songs in one day, that felt so cool and easy! Since then I have released a few songs, Jealousy, Too Close, Pretty Enough and Ain’t Even Friends, the process seems longer these days, sometimes frustrating, the more people who are involved, the longer things take. Sometimes I daydream about putting hundreds of my songs up on SoundCloud in one day, that would be cool!

I’ve gigged locally since I was 12, I played a pub gig in the valleys once, there was a stage and a full on PA system one of the best setups ever, and there was three people in the audience, I just rocked out! I played at the O2 London in a national open mic competition final, now that was crazy…. I’m 18 now, so I guess I’ve already gigged for 6 long years, LOL… Next week I play to 4,000 young people in mid Wales, I’m supporting Ministry of Sound, I think it will be pretty crazy everyone wants to party there… I can’t wait for that gig it will be the biggest audience I’ve played to so far…

I never think about this really, I presume audiences decide this for you. I think everyday all day, and all night sometimes about lyrics, tunes, sounds, concepts and ideas, that’s all I can do. I hope people listen to my music because they can empathise with my lyrics and my vibe. I write songs about how I feel, what I’m thinking, it’s like an open diary, but maybe not completely factual, as my imagination takes over sometimes.

The whole music scene is crazy right now, there is so much music being released, but also there are thousands and even millions of new listeners every day. I’m not a big fan of the playlist era and this algorithm idea or an ‘AI’ created playlist, but we’re all getting to busy to create our own playlists, so most people just take what’s on offer… I have stats that show people listening to my music in really obscure places, sometimes I think that’s crazy, from Sully through all this technology to Korea, that is silly… I obviously stream music, but I miss CDs and being able to look at pictures and lyrics, learn about writers and producers, who the band is etc… that info is hard to find on platforms like Spotify, especially when you go from one song to another. I’m a real music geek, I read all this stuff and memorise it. I read up about Max Martin after seeing his name on the back of a Britney CD, I told my friend once that he wrote some Jon Bon Jovi songs, and they where like “What, Jon Bon Jovi didn’t write his own songs” I’m like erm…. Sorry to crush your dream, but a lot of artists don’t write their songs, I get why, but I wouldn’t want to do that, I like writing too much and then performing my songs and telling people my story it’s such a privilege when you have an audience.

My playlists, I think they’re to crazy to share. I got stuff like  “Ski Mask the Slump God” to “Britney”, a little bit of “the Pixies” to “Charli XCX” – I listen for all  different reasons, the songs, the live performance the vibe, the image, or the production….

I have some new releases planned I know that’s a standard answer! Aspirations also, if I can write, make and perform music forever, make a living from what I enjoy, I’m happy… if lots of people listen I guess I’d be even a little happier …