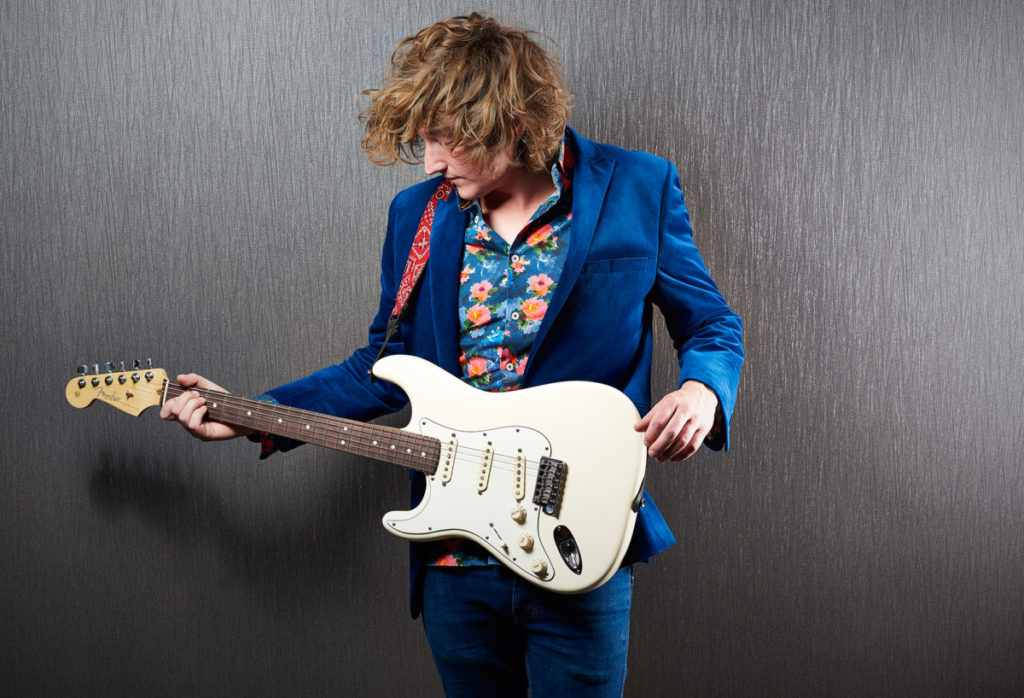 My name’s DD Allen and I’m a singer, songwriter and guitarist from Bournemouth. I started out performing gigs as a solo acoustic act and formed a band shortly after supporting James Blunt at the BIC: it was a huge show for me but I got restless quickly and wanted to explore a bigger sound.

I became friends with local guitarist Christian Evans in the early days. He was fairly new on the circuit in Bournemouth and played at my debut EP release show. Christian’s become an integral part of everything I do with the band. He’s grown into a great guitarist and has a very distinctive sound — he’s got a sort of John Mayer thing going on. The rest of the line-up’s changed a bit over the last three years but former Cramatics bass player Alex Reed has been involved for a while.

I started playing electric guitar at school and picked it up pretty quick. It gave me a lot of satisfaction because I wasn’t very focussed in lessons and was always getting into trouble. When I left school I applied for a placement at a music academy in Southampton. I knew my scales and thought I was pretty handy, but the instructor didn’t think I’d cope with the theory and I didn’t get in. I was pretty devastated but carried on learning by studying loads of different guitarists like Angus Young, Slash, Rory Gallagher, Jimi Hendrix, Eric Clapton and Derek Trucks. My dad took me to see Bob Dylan a couple of times and although I didn’t quite get him at the time, I loved his band. Bob had Charlie Sexton and Larry Campbell playing at those shows. It wasn’t super-loud and loaded with riffs, but it was very polished.

Things really changed when I moved away to Woking with my girlfriend and took up a job at McLaren. I met Lewis Hamilton a couple of times and became really inspired. On the outside you had this superstar Formula 1 World Champion, but on the inside he was just a normal guy with a talent who’d made amazing things happen in his life through hard work and dedication.

After a few months the relationship I was in became strained and I found myself getting more and more immersed in music. Then I finally got Bob Dylan. His songs inspired me to start writing, relentlessly. Dylan’s influence took me down an acoustic route and within a year I’d recorded a debut EP and snagged the James Blunt support show. That was a life changer for me — it didn’t propel me into anything massive, but I knew right then I didn’t want to do anything in my life other than play music.

When I put the band together, I’d been listening to a lot of tulsa and southern rock. People like JJ Cale and Steve Gaines from Lynyrd Skynyrd. And I was heavily influenced by Dylan’s Oh Mercy and Time Out of Mind period: that Larry Campbell/Charlie Sexton guitar sound and the wonderful Daniel Lanois production. I struggle a lot with the genre thing and I think we’re difficult to put a label on. The three song’s we’ve released have an americana style, but a lot of the stuff we play live is more roots rock. First and foremost though, we’re a guitar band.

I’m not sure about impact, that’s quite subjective. But we’re definitely doing something different. We were lucky enough to record our first official band tracks at Monnow Valley Studio in Wales with engineer/producer Mike Spink. Mike’s got a double platinum credit for The 1975 and Jake Bugg debut albums.

We’ve released three of the songs so far and the fourth single is scheduled for release in September. The band hadn’t been together that long and none of us had worked with a producer before, let alone record in a big studio. We recorded pretty much everything live and I’m really proud of that because it’s not easy. The debut single ‘Just Like The Old Days’ has become a bit of an anthem at live shows and the crowd always get in on the chorus.

We’re not a mosh band, we’re a modern guitar band playing music with a focus on the lyrics. It’s a big sound and there’s lots going on. We’ve played some great shows in London and supported Con Brio at the Lexington. And we’ve played at the O2 Islington in the national finals of The Pogues Irish Whiskey Shot at Discovery. The best show was our first hometown headliner at the 500 capacity Old Fire Station last November.

We’re still working on the debut album so we’ve not gone out on an official tour or pitched for a big support yet. But we love playing festival’s and we’ve had a great run on some big stages at Larmer Tree Festival, Chagstock, Camp Bestival, Teddy Rocks and Electric Picnic in Ireland.

My vocal is pretty distinctive and so is our guitar sound. We’ve got two lead guitarists and you don’t hear that very often. Our fans are really into the lyrics. I write stuff that fires the imagination. Sometimes it’s straight up-front like ‘The Whistleblower’, which I wrote about Gambino mob enforcer John Elite. Or ‘Mr Nice’, which I wrote about drug dealer Howard Marks. Sometimes it’s close and personal like the song that’s just about to be released, and other times it’s a story that captures my attention.

The song I’m recording at the moment was written for two childhood sweethearts who went their different ways in life, both ended up married then divorced, but came back together again after all these years despite living in different countries.

The market’s dictated by the fans and the way they want to listen to music, artists have little influence on that. I can’t remember the last time I bought a CD. I stream on Spotify because I listen to a tremendous amount of music and it’s the simplest way for me to track down what I’m looking for.

Sure, I’d like to sell tons of CDs, but I’m an independent artist and if I had to choose between selling a CD or a ticket to a live show I’d go for the ticket. That said, I’d like the debut album to be released on vinyl. There’s something more organic about vinyl, and that’s the way we make music.

I’m listening to a lot of Ryan Adams and First Aid Kit at the moment. I also recently discovered ‘The New Basement Tapes’, a collaboration between T-Bone Burnett, Elvis Costello, Marcus Mumford and Jim James from My Morning Jacket. And I’m pretty into Noel Gallagher’s High Flying Birds. Noel’s an incredible talent and his band are superb live.

Career-wise, I want to get to the point where I’m making music full-time for a living. Just like we all do. Our fourth single (and the last song from the Monnow Valley sessions) is coming out in September. And I’m also back working with Mike Spink on two brand new songs with the band. They’re scheduled for release this November and February 2019. I’ll also be touring with the band in the spring and I’m looking forward to playing in London again. And Bristol, Birmingham, Liverpool and Manchester for the first time.