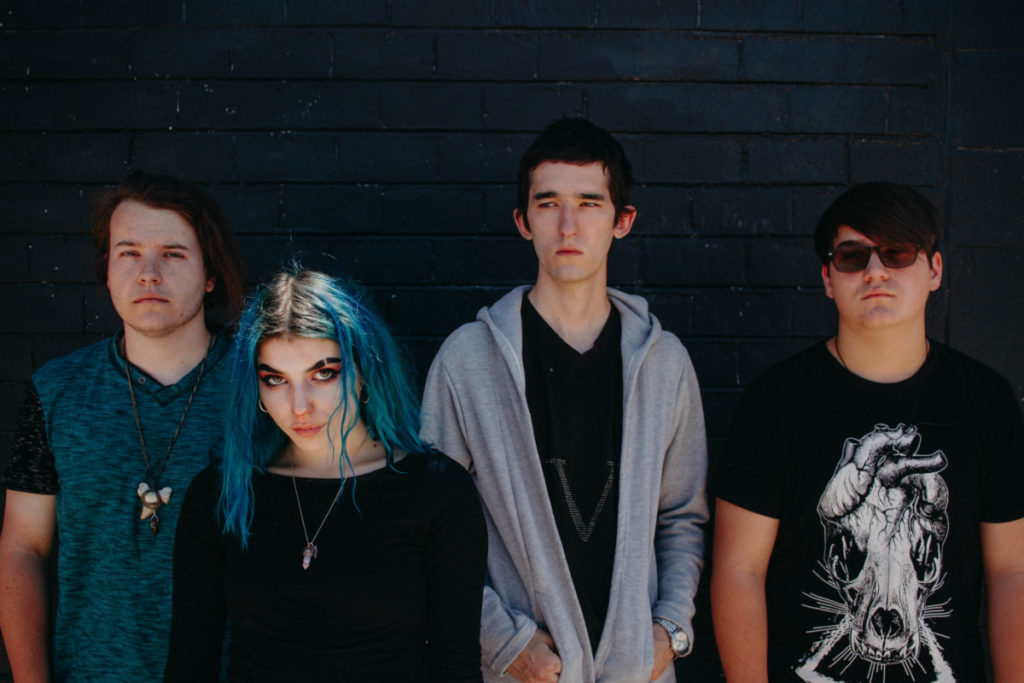 Almost Awake is Drowsy (lead vocals, rhythm guitar), Kalani jones (lead guitar), Tommy Cochran (bass) and Bryson Drace (drums). We were all born and raised in Vegas. Kalani and I met in church in 2010 and played music together then in 2014 we started writing original music together and that’s whenAlmost Awake was born. We needed a full team so Kai took the internet and put an ad on Craigslist, a few days later Tommy auditioned and he ended up being the perfect fit. We just recently had Bryson join us on our Lil Freakshow. We auditioned him in late May of this year and since then we’ve done so many shows together it feels like he’s been around from the beginning. We’ve been very blessed to have the formation of our band be so natural and unique.

We are all each inspired by very different types of things but somehow they all make for an interesting product. I’m primarily influenced by rock/alt/indie/folk/ r&b acts. Kalani mainly listens to instrumental rock/math/progressive rock type artists, Tommy’s influences include 90s rap/hip-hop/punk/pop punk styles, while Bryson holds it down with his post-hardcore/heavy rock influences.

We are very proud of everything we’ve been able to do as a band. Even the small things. We started off with a five song EP back in 2015 just to make something, then a full length LP in early 2016 called “Until Tomorrow”, which is more equivalent to that of like a mixtape because we really just wanted a solid project to get our name out there and submit our music for some opportunities. We released a couple of music videos with it as well. We are always writing and evolving. That album was captured the evolution of our early music. It transitioned nicely into our actual debut as a real, actual, musical entity, which was our single “Cloudwalker”, that we released in June of 2017 and is the most up to date thing we have out available for streaming. We have played countless shows in our hometown and in southern Cali, and have played a few tours and smaller festivals on the rest of the west coast. We played a date on Warped Tour earlier this year which has been our biggest gig up to date.

As well as our recorded music, our live show has evolved with it as well. For starters, I used to only do vocals live, I just recently started playing rhythm guitar live. We had a very polished, theatrical type live show where I’d dance around the stage and sing high ass notes and the guys would all jump around and bang on drums and stuff, so it was really fun, especially because it fit the music and the vibe we were going for. Now I think we are a little more transparent on stage, yet still delivering a high-energy, exciting, and raw performance. It just makes more sense for the songs we’ve been writing.

We’ve always stood out as being the “young” or “female-fronted” band, which we still are of course, but to us what makes us stand out is our music. Every band says that, but we really do believe we have captured something special in our songs. Between the lyrics and melody, the fresh chord progressions, groovy rhythms, insane guitar work and catchy basslines, I feel we deliver something everyone can like or at least relate to.

Personally, I use Spotify for my everyday binge-listening, because it’s convenient but I also love buying CDs, cassettes and vinyls for the novelty because I love the art form. I love reading the lyrics and the credits and the artists’ thank-yous – I find it so profound and personal. I think it’s important to offer those things to people even though most of the time they’ll just stream it for free, because there are still a lot of people like me who like to collect physical copies and dive deeper into the project. It’s also another avenue for income in regards to merch, so hell yeah for that ha! I don’t think there’s anything wrong with people streaming or downloading, only because i understand the convenience factor obviously, unless someone only has a CD player in their car or a record player in their room rather than a bluetooth speaker. For me, as long as people are able to listen to the music at their disposal and come back to a show singing the words, I’ve reached them… who cares if they paid for it, I only make a dime off their purchase on iTunes anyways HA.

My favourite new albums/songs are Ever Changing EP by The Neighbourhood, Who Hurt You? by Daniel Caesar, Trench by Twenty One Pilots, Abysskiss by Adrianne Lenker and also literally everything the 1975 has been doing. Tommy has also been jamming the new Twenty One Pilots. Kai’s been into some good old harp music these days and Bryson has been listening to Disease by Beartooth, The Red Chord, and Snarky Puppy.

We have a couple singles and music videos coming out in the next few months and after that we’ve got a five-song EP coming out, as well as music videos and hopefully a full US tour… finally!

DAVID CROSBY – Here If You Listen

Being Stuck Doesn’t Have To Be Ear-splitting