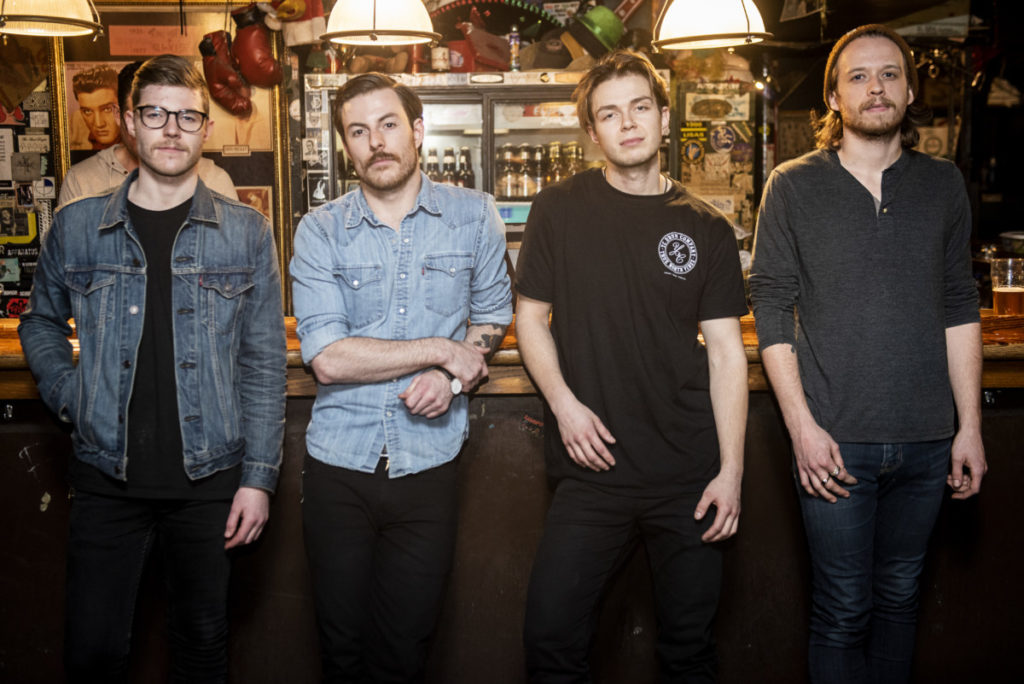 The Honest Heart Collective. All four of us were born and raised in Thunder Bay, ON. There isn’t a lot to do in Thunder Bay besides drink and play hockey, but there’s a really great music scene here, and we all cultivated our musical roots here in the city. We’ve played music and been friends since we were kids, and Ryan, Nic, and Jay played in a handful of bands through their teenage years, while I was lamenting the fact that I was in business school and not in a band. Eventually, Ryan and Nic went to a Springsteen concert, which sparked the idea to start a rock band, and shortly thereafter, Ryan started the project while he was in school. Eventually, the timing was right, and we were all on board to become the band that we are today.

For myself, I was hooked since the first show. I had been to shows before (technically my first concert ever was *NSYNC in Minneapolis lol), but my first time seeing Protest the Hero at a local venue called Kilroy’s is the one that did it for me. Seeing one of my favourite bands up close and personal like that was a new experience for me, and I immediately fell in love with the experience. We went to shows all the time, and the idea of being in a touring band was what we all strived for. We all grew up listening to heavier music, but through years of playing and learning more about music, we dove into other genres, and just sort of naturally fell into the sound that we have today. Collectively, I’d say we draw influence from Foo Fighters, Springsteen, The Gaslight Anthem, Catfish & the Bottlemen, among many other artists and genres.

So far, we’ve created one EP, and two LPs, as well as a small handful of covers (Johnny Cash and The Beatles). I don’t exactly know how to describe the impact that we’ve had, because music impacts people in very personal and different ways, but we have had an outpouring of support from our local fanbase. It’s not very often that a local band gets on the road from Thunder Bay, because we’re very secluded and it’s a daunting task, but I think people are proud and excited that they have a band sticking their neck out there saying “we’re from Thunder Bay, ON, listen to our rock music”.

We have been called a “live band” many times in our touring career. After releasing our first LP, Liar’s Club, it became apparent that we needed to find a way to capture the energy that we bring to the stage, in our recordings. Since we all grew up going to shows that were absolutely batshit crazy, the only way we really knew how to get up on stage, was to go batshit crazy. I think it kind of went over all of our heads that it was a little unnatural to see a rock band headbanging and running around on stage the way that we do, but that’s just the way we like to do it. Over the years we have been fortunate enough to open for The Glorious Sons and Danko Jones, and we’ve played Warped Tour in Toronto. For the most part we book our own tours, and I’d say our best tours have been with bands at a similar chapter in their careers. The most fun we’ve ever had was hitting the road with Texas King, Aukland, and New Love.

I think that we differ in the sense that we all listened to and played heavy music growing up. That doesn’t necessarily mean that our music is “heavy”, but we’ve always wanted our music to be passionate and powerful. We want it to hit you hard, whether it’s in the heart, or the face. We go for a full, large, encompassing sound, and I think that lets people get lost in the music a little easier.

I think streaming services are great overall. We all use Spotify and Apple Music. Streaming services have drastically changed the way music is consumed, which in turn creates a reaction for music creators and record labels to change the way they create and bring music to market. It’s a really interesting phenomenon to live through as an artist, because the same strategy that we’ve witnessed other artists use time and time again is suddenly an out dated approach, and the change happened so fast. We’ve heard time and time again that “the album is dead”, but we still love to create albums, so we need to adapt and find a way to make an album work in today’s world. It’s a challenge, but we welcome it.

The main reason I think streaming services are great, is that you can finally get paid for people to listen to your music again. They took the musical climate of everybody having access to all the music ever made for free, and found a way to monetise it again. In addition, they created another angle for artists to get their music to new listeners. Obviously, the best way to support a band you love is to buy a physical copy of their CD straight from the source, and in fact usually while we’re on tour we’ll listen to CD’s in the van, but the difference today is you need to make a cognitive effort to think “I love this music, I’m going to buy it so they can carry forward”.

Lately, I’ve been making an effort to listen and learn from pretty much anything and everything. Gary Clark Jr., John Mayer, Post Malone, Rage Against the Machine, Marcus King Band, Tycho, Tash Sultana, He Is Legend, Texas King, DON BROCO, Bring Me The Horizon, Crooks (UK), Defeater, Architects, Nothing But Thieves, Knocked Loose, The Menzingers. The list really does go on and on.

We are in the middle of putting together our next album. We’re writing and demoing, and also planning a lot of other stuff at the same time. Can’t say much other than that, but I am excited, and I think this will be a great year for us. Keep an eye out for announcements.

A CHAT WITH: CLARE TEAL

Architects, While She Sleeps & More Added To Bring Me The Horizon APE Festival Date