Architects, While She Sleeps & More Added To Bring Me The Horizon APE Festival Date 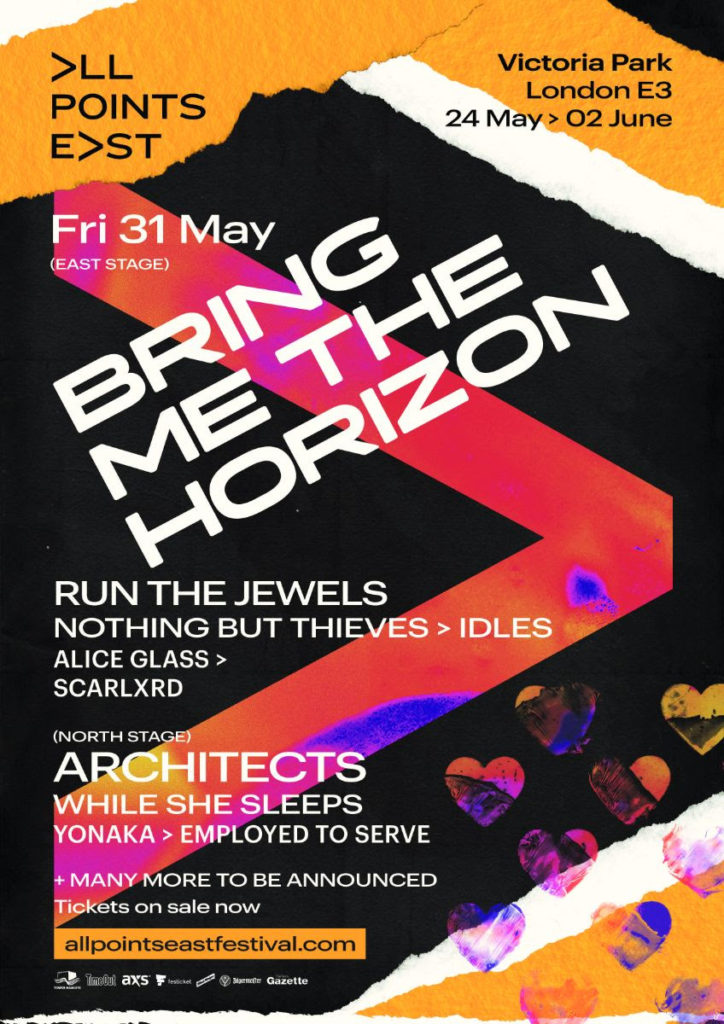 BRING ME THE HORIZON

PLUS ALREADY ANNOUNCED:
Run The Jewels, Nothing But Thieves, IDLES, Scarlxrd and Yonaka

All Points East have added four acts to the previously announced Bring Me The Horizon headline show.  The band who this week achieved chart success, scoring their first number one album with new record ‘Amo’ have curated their own day at the Festival to be held in London’s Victoria Park. Architects, While She Sleeps, Employed To Serve and Alice Glass have all been added.

Commented Bring Me The Horizon “We are extremely excited to announce the next round of acts on our very special day at all points east festival. Many of the bands are great friends of ours and we can’t wait to come together to play at Victoria Park.”

Brighton-based metallers Architects released their most recent record, late 2018’s Holy Hell, to phenomenal response. The album, which addresses the recent passing of guitarist Tom Searle, is wracked with grief, passion and a strong sense of mortality and was crowned as the group’s “finest album to date,” by the NME. Having previously performed at some of rock’s biggest events and stunning audiences at shows worldwide, both as headliners and alongside the likes of Parkway Drive and Enter Shikari, Architects have curated a live set that you wouldn’t want to miss.

Formed in 2006, While She Sleeps are no strangers to the stage. Having performed at Warped Tour, Rock im Park, UNIFY and Reading & Leeds among others, the group have rendered themselves as a force to be reckoned with. Their debut record, 2010’s ‘The North Stands For Nothing’ received critical acclaim from the likes of Kerrang and Metal Hammer, and the group have since gone on to release two more records. Their most recent offering, 2017’s ‘You Are We’, was released independently with the help of crowd funding from their fans, with the record itself described as “an album that bristles with hooks, crackles with power and almost overflows with passion.” Now, the group are set to bring that same passion and power to the stage at Victoria Park, delivering a set that will have audiences head-banging in unison. Their new single ‘THE GUILTY PARTY’ was just released and brand new album ‘SO WHAT?’ arrives 1st March. Sean Long from the band commented “The line up is clearly next level. We can’t wait to bring the Sleeps show to Victoria Park and prove we’re meant to be there.”

Feral hard-core quintet Employed To Serve have made it their mission to decimate every venue the UK and Europe throws in their path. Known for their relentless live charge, the group have made appearances at Damnation Festival, Incubate Festival, and have toured with the likes of Rolo Tomassi, Milk Teeth and Black Peaks. Their 2017 album ‘The Warmth of a Dying Sun’ was crowned Kerrang’s album of the year and boasted a heavier and darker feel than its predecessor ‘Greyer Than You Remember’, firmly establishing the groups sound and proving to be their strongest release yet.

Canadian singer and songwriter Alice Glass embarked on her solo career in 2014, breaking away from her co-founding position in electronic band Crystal Castles. Her debut solo single, ‘Stillbirth’, was released to increase awareness of domestic and sexual abuse, with all proceeds from the tracks revenue going to aid abuse victims. Following the 2017 release of her debut self-titled EP, Glass toured with Marilyn Manson. Glass has since released a string of singles and has grown to be known for her dedication to live performance, performing five months worth of shows on crutches after straining an already-injured ankle.

Taking place during All Points East’s second weekend Friday 31st May 2019, Bring Me The Horizon will be bringing an exciting diverse line-up to Victoria Park. The show will be the band’s first-ever festival headlining set and their only UK headline show for 2019. 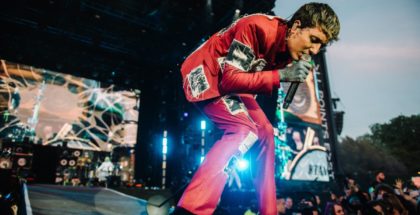