New York three-piece fun. will release single ‘Walking The Dog’ to coincide with their next trip to the U.K. which will see the band opening for Paramore at their arena shows in November. Just after they wind up the run of dates, fun. will release single ‘Walking The Dog’ on 22nd November. This tour will be the trio’s third visit to the U.K. this year and, even though they’ve only recently released their debut album over here, fun. have already played sold-out headline and club shows as well as going down a storm at festivals such as Dot To Dot.

Singer Nate Ruess is excited to repeat the success of their tour with Paramore in the U.S. over on these shores – “The last tour we did in the U.S. was the Paramore tour, and it was amazing… then we left that tour and went straight to the UK, and that was amazing… so now we are combining those two? It doesn’t get much better or more exciting.”

‘Walking The Dog’, from the band’s debut album ‘Aim and Ignite’, began life whilst the band were at Nate’s apartment in Brooklyn. The guys were actually on a break from recording demos for the album but were clearly still feeling creative. Nate explains “I guess at some point we were joking around and Jack picked up a guitar (I only say we were joking around, cause none of us are the type to pick up an instrument in someone’s house and just start jamming… that person is always annoying). He started playing the opening line and our joking lyric was “walking the dog cause the cat is dead” and from there we built a song out of it. I didn’t finish the lyrics or the melody til the day I was supposed to record vocals.”

fun. have made a video to accompany the track which is typically colourful and playful.
Check it out here:

The band’s debut album ‘Aim & Ignite’ is available on CD, Download & LP, along with exclusive merch items from http://hasslerecords.sandbag.uk.com.

Marques Toliver to perform on Later with Jools Holland 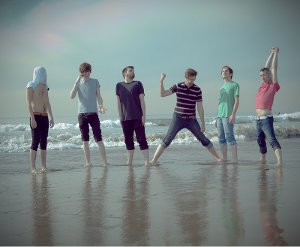 Robbie Williams to rejoin Take That for new album and tour... 15 July 2010 | aaamusic