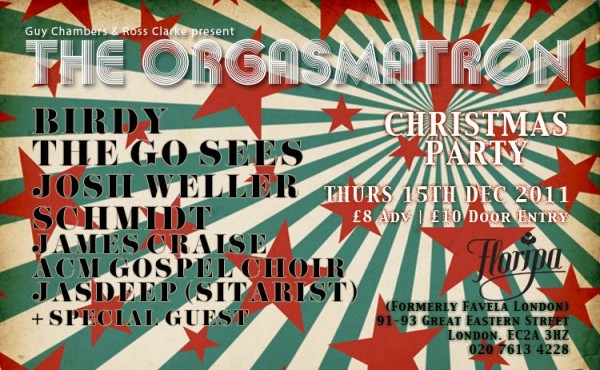 Appearing like the bastard lovechild from a menage a trois between Radio 1’s covertastic Live Lounge, Lenny Beige’s bloated Talk of the Town and re-runs of The Tube, The Orgasmatron is the brainchild of producer/ song writer Guy Chambers and Shoreditch club impresario Ross Clarke. Could it be London’s Best Kept Music Secret? We think running as it has at Floripa (formerly Favela Chic) for over 2 years now with guests including William Orbit, Beverly Knight, Paloma Faith, Goldie, Katie Melua, Kirsty Almeida, David Arnold, Kaiser Chiefs, The Noisettes, Example, Matt Cardle and a whole host of talent from beat boxers to magicians, choirs and tap dancers.

Originally set up by Chambers as, ‘a night to which I can invite all my mates,’ The Orgasmatron has swiftly become the club night to be seen at, offering musical experiences that won’t be found anywhere else. Forget The Box, those in the know are revelling in unique performances and the delightfully unexpected here in Shoreditch once a month (last Thursday of the month).

And for Xmas we will be gathering around the piano with candles and caipirinhas to sing carols, rebooted Christmas songs and much more…

British singer/songwriter from London. Josh Weller is known for his 1940s attire, big hair and glasses. He has been photographed by both Rankin and Boy George. Weller has toured and played with Mumford and Sons, The Noisettes, The Maccabees (Orlando Weeks, lead vocalist created Josh’s ‘trademark’ Logo), Florence and The Machine, Born Ruffians, The XX, Johnny Flynn and Paloma Faith since he began playing live in 2008. Weller describes his music as pop, and sites his influences as Chet Baker, Randy Newman, Paul Simon, Woody Allen, Richard Pryor and De La Soul. In 2009, Weller released the Christmas single “It’s Christmas (And I Hate You)”, a Christmas duet withPaloma Faith. He also wrote two songs for Brazilian singer Cibelle’s 2010 album Las Venus Resort Palace Hotel. He is currently writing is debut album.

THE PLEASURETTES
These girls went down a storm at the last two Orgasmatrons with their Pans People-esque routines. Resident dancers at Guilty Pleasures for 4 years, spotted by Fatboy Slim who fell in love with them so he asked them to dance during his set for Glastonbury

Solo artist managed by Clive Black and discovered by Sir Trevor Horn. Jamesrecently collaborated on a track called ‘Checkmate’ with Guy Chambers for 30/30, the Roundhouse’s groundbreaking youth music project in conjunction with EMI which is designed to find and cultivate new and emerging talent from all genres and backgrounds.

The ACM Gospel Choir is a musical collective of some of the most talented singers, songwriters and performers in UK today. With a great blend of voices from different genres, different continents across the world and different ages the ‘New Gospel’ sound that they have created is very unique and one that is sure to enthrall its listener. Born out of a dream to harness this talent and use music, song and performance to bring joy, laughter, happiness and ‘Good News’ to the world of music, the choir was formed in 2005 by Mark De-Lisser the choir’s Musical Director.

Jasdeep met Guy Chambers through the BBC2 series Goldies Band: By Royal Appointment in which Guy was a mentor. Jas went on to play Buckingham Palace with his band 12lve and is now touring with them.

Jasdeep Singh Degun is a young and upcoming Sitarist born and raised in Leeds, UK. Having studied Indian Classical vocals from a young age, Jasdeep started learning the Sitar at the late age of 15. He has acquired a deep insight into the art of Indian Classical music and continues to do so with his teacher, Ustad Dharambir Singh MBE. Because his family have no musical connections and because it is uncommon for classical sitar players to emerge from the Punjabi community, Jasdeep has often become isolated. However, his passion for music continues to shine through his dedication towards teaching and performance

THE GO SEES
Be prepared to be blown away by this 5 piece rock band from Camden playing music to bang your head to. Our ones to watch.