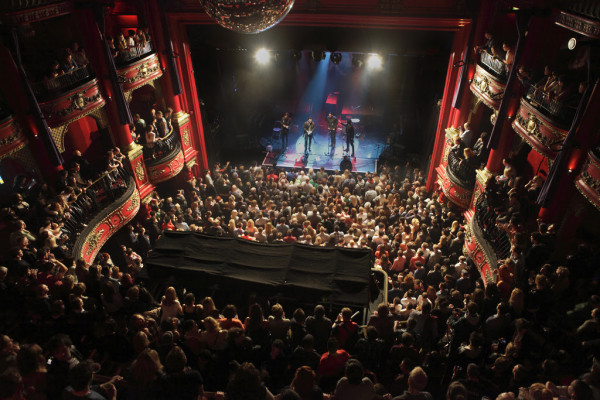 After a one year hiatus Camden Crawl is back for 2014, revamped and ready to get you in the mood to see some of the best independent music acts around from all over the globe. It will be taking place over various venues from the cosy Black Heart to larger spaces such as KOKO and the Electric Ballroom, as well as the ones in between: Camden Town Brewery, Roundhouse and Underworld. Plus with over 250 artists set to play over the two day festival, it will undoubtedly be a memorable weekend. Here I present to you the Top 10 acts that need to be seen:

Signed to London label Tough Love Records, Cymbals play cool laid-back minimal disco songs arranged over glistening guitars, as demonstrated by stand out songs ‘Erosion’ and ‘The Natural World’ taken from their current album The Age of Fracture only released this year. Having come on leaps and bounds since their first LP Unlearn in 2011, for members Dan, Jack, Neil and Luke they definitely will be acquiring a tonne more fans at CC14.

With an unquestionably appropriate time slot for the band’s woozy lovelorn lo-fi and at times denser live reverberations courtesy of 2013’s June Gloom and the addition of a fuller band; expect romanticism, young uncertainties amongst a sea of waning lust, to witness the undeniable chemistry between the duo that is Alice Costelloe and Kacey Underwood and to leave feeling a bit more in love with Big Deal.

This songstress with the cleanest pixie cut in town will surely get you dancing with her big beats, ballsy attitude and bullet girl dancers in tow. Alongside catchy pop infused songs about love cheats and crushes this is an act you don’t want to miss, having recently appeared on Made in Chelsea and hailing from Goldsmiths with successful alumni which includes James Blake, Katy B and Graham Coxon, there’s no doubt Miss Laura Bettinson will be following in their footsteps.

Slaves are a garage-punk duo hailing from Tunbridge Wells, Kent. Now signed to Virgin EMI Records; Isaac Holman, 22 (drummer) and Laurie Vincent, 21 (guitarist) are set to unleash their riotous ruckus noise on the masses. ‘Where’s Your Car Debbie?’ is a perfect specimen of the raw savagery the twosome have to offer live and will most likely join the ranks of notorious guitar and drum duos as illustrated by The White Stripes and The Black Keys.

Marshall serves up fresh sounding RnB with her smooth vocals placed against a background of chilled out electronica and cheerful melodies, as demonstrated by ‘Your Love Is Like’, which bestows a euphoric, listen. The 22-year-old London-based, Baltimore born singer-songwriter is bringing something refreshingly new-fangled to the at times dull soundscape of RnB, which plagues the charts. Featuring on Matrix and Futurebard’s single ‘Control’ which charted in the UK Dance chart at no. 4 and an EP release titled Pressure in October 2013, she is surely going to be making a certified dent on the music scene. 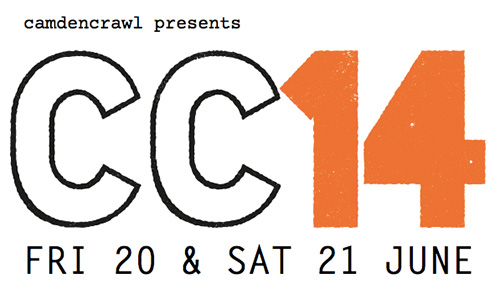 The Brooklyn trio featuring Erika Foster (Vocals/ Keyboard), Annie Hart (Vocals / Keyboard) and Heather D’Angelo (Vocals/ Drum Machine/ Keyboard) are in no need of any introduction. Producing their sweet electronic whimsical pop since 2003, Au Revoir Simone are veterans in their field of synth laden guitar music which is totally appropriate to CC’s electronic focus for 2014. Having stuck with Moshi Moshi since their debut album Verses of Comfort, Assurance and Salvation made in 2005 and their fourth album Move in Spectrum, which consists of amazing tracks like ‘Crazy’ being released in 2013 on the same label it’s clear that their loyalties lie in the indie club. Not too far from some of the weekend’s bigger headliners the collective are destined to be one of the major highlights of the weekend.

If you are looking to enjoy some post-punk ripen sounds with a modern edge, hazy guitars and hints of lo-fi then Mazes are for you.  The Mancunian three piece made up of Jack Cooper (Vocals/Guitar), Conan Roberts (Bass) and Neil Robinson (Drums) construct strong melodies hand in hand with chugging rhythms and reflective lyrics on the banalities of everyday life. At times bittersweet and understated, the band is forever intriguing. With a DIY attitude at the heart of the group, creating their second LP A Thousand Heys in their own make shift studio and hypnotising songs which is apparent in the form of ‘Bodies’ and ‘Skulking’ it’s hard not to be captured by their musical landscape.

The London-based duo craft enchanting electronica which glistens and shimmers, well produced and alluring their songs ‘Dancing’s Done’, ‘Sounds of Screams’ and ‘Unkinder (A Tougher Love)’ are perfect examples from their first album Galore let loose only in February this year, via Transgressive Records. Tribal-desires, coloured-contours or experimental as highlighted on their Soundcloud, however you want to categorise Marcus Pepperell and John Hamson Jr’s music, it will easily leave you with a smile on your face.

Deep and at times grim lyricism is combined with brash guitars, which channels unadulterated punk rock- PAWS exhibit that you can be meaningful and a tad bit reckless all at the same time and why not? After a few line-up changes the Glasgow-based band seem to be settled and now with their second full length record out Youth Culture Forever by means of FatCatRecords, after their infectious debut LP Cokefloat things seem like they will only be getting better, as they move forward and progress and with two performances during the festival, it is essential you catch them at some point over the weekend.

With a fan already in the form of Annie Mac, Jay Prince dishes up relaxed old-school hip-hop with nostalgia, way beyond the years of the 20-year-old East London artist and producer. Not messing around Prince in the last two years has already manufactured an EP titled Voyage and two full length mixtapes Lounge in Paris and Mellow Vation produced in 2013 and currently available as a free download through his bandcamp page, there is plenty more to come as he works on new material for the future. Make sure you watch catch this suave lyricist in action.

If this list is still not enough to convince you to head to NW1 in a couple of weeks for the two-dayer, tickets will be available for walk up purchases over the weekend at the box office located in KOKO from 3pm- 10pm. For the decisive clusters of you itching to get your hands on a ticket; the full weekend cost approximately £57 and individual day tickets for Friday and Saturday are around the £34 mark, from various ticket suppliers. Check the CC14 website for further details by clicking here…

Check out the full lineup below, as well as the official CC2014 Indie playlist… 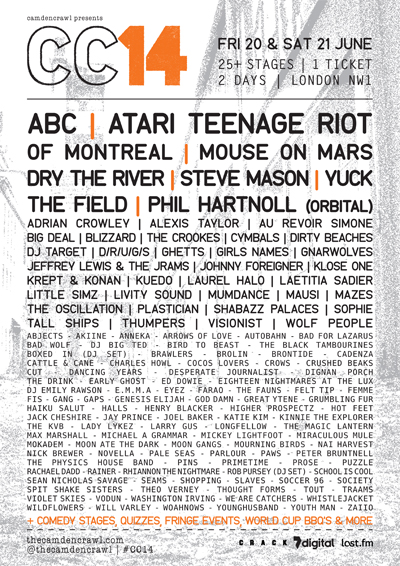