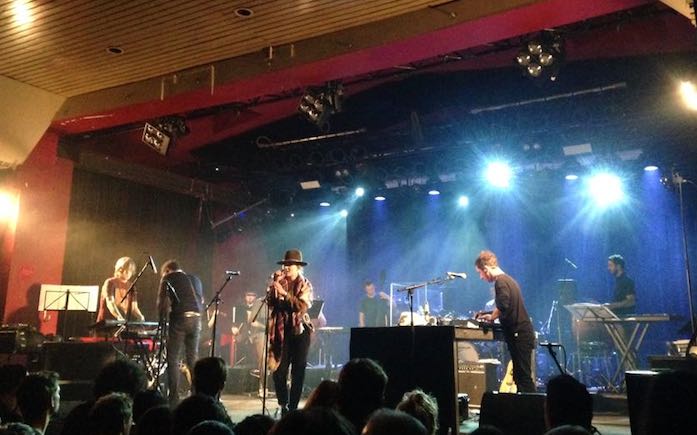 I’m almost ashamed to admit that this is the time I’ve managed to see The Cinematic Orchestra live. I’ve been waiting a long, long time to lose my TCO virginity, and in the lead up to the Berlin leg of their European tour I went through various emotional states: following the relief I felt about finally getting my shit together to see the seminal UK electronic jazz collective, I experienced excitement, which quickly made way to unnerving anxiety over whether they’d live up expectations. Maybe the reality of experiencing something I had, up until then, only experienced in my imagination would leave me disappointed…maybe even embarrassed? Nope.

The Cinematic Orchestra came to prominence at the turn of the century when bandleader Jason Swinscoe released a an album – Motion – that would not only become an unexpected hit and highpoint for label Ninja Tune, for which he used to intern for, but would go onto to establish the project as the epitome and primary influence of the whole ‘nu-jazz’ scene. The following two albums made them relative household names – 2002’s Everyday and 2007’s Ma Fleur, featuring signature hit (and perennial TV-ad botherer) ‘To Build A Home’ – but despite soundtrack and compilation work, plus a string of tours, things have been rather quiet in the TCO camp in recent years. That’s all set the change…

Tonight at Berlin’s Astra (not the most ideal venue for this kind of music, but certainly sufficient), The Cinematic Orchestra deliver a masterful overview of their past and what we can expect from them in the future. Swinscoe, positioned behind keys and electronics, in joined by the full TCO experience, including touring musicians, guests and a mixture of new and old core members – and they all excel. Drummer Luke Flowers’ (one of my favourite drummers – he also performs with Matthew Halsall) precision leads the line during the group’s jazzier numbers (‘Flite’ was a highlight), especially during the improvisational segments. He is joined by sax, a string trio lead by guest collaborator Miguel Atwood-Ferguson on violin (who performed a supporting set with Thundercat), bass, piano, percussion by guest Manu Delago (who also plays with Bjork), guitarist-singer Grey Reverend, and two female singers Tawiah B and Rachael D’Arcy.

In terms of the setlist, the band begin with a couple of classic TCO cuts – a brooding, restrained rendition of instrumental ‘Burn Out’ and personal favourite ‘Child Song’, powered by the vocals of Tawiah – before revealing a bunch of new tracks from a promised new album scheduled for next year. Music-wise, the new cuts touch on the latter-day shades the band are known for, including minimal neo-classical and electronica (there is a surprising minimal techno urgency to one of the tracks), as well as trip hop and an excellent meander into Sigur Ros-esque orchestral post-rock.

However, the best moments of tonight’s performance come when they just jazz-out, including the aforementioned ‘Flite’, encore ‘Ode To The Big Sea’ and dramatic, sample-infused ‘Man With The Movie Camera’ (the song that Hidden Orchestra surely get their whole sound from), which closed the main set and perhaps best made use of the string instruments. That said, perhaps they only hit hardest because the more introspective, vocal-led songs created a calming point from which to compare. In fact, it’s this shade of TCO that is the most widely popular, with ‘Breathe’ and inevitable encore ‘To Build A Home’ (given a makeover by Grey Reverend) receiving the warmest reception.

What struck me most about the concert was the group’s harmony: the performers truly played with a deep understanding of not only the material but each other, and although it would have been easy and forgivable if a particular element had been occasionally drowned out, this was never apparent. The central instruments of keys, sax, guitar, bass and drums were successfully accentuated and fleshed out by the supplementing vocal, orchestral and percussive components. The Cinematic Orchestra are a band I consider to be one of the key inspirations for a lot of the contemporary jazz and live electronica groups I enjoy today, but, musically at least, this was a case where seeing the original artefact really showed up the limitations of the students and imitators.