‘1933’ is the first track from Frank Turner’s up and coming album Be More Kind, and focusses on the current political climate, specifically questioning right-wing ideologies. Sparked by articles that suggest the alt-right was punk, Turner’s angst-fuelled ‘1933’ manifests itself as a punk rock anthem, laced with scepticism and highly memorable hooks.

This folk/punk hybrid holds no punches while criticising decisions made by the majority: ‘The first time it was a tragedy/ the second time it’s a farce’. Turner seems almost embarrassed and ashamed to be part of a generation that has allowed for such political madness to persist as he sings: ‘If I was one of the greatest generation/I’d be pissed/I’d be screaming at my grandkids/that we already did this’.

‘1933’ paints a clear image of his frustration not only through powerful lyrics but also through steady, march like percussion and catchy choruses. Throughout the track, Frank Turner persists to ponder where things can go from here. with the repetition of lyrics such as, ‘don’t go mistaking your house burning down for the dawn’, highlighting not only his lyrical mastery but his pessimism for things to come and seems to beg of the people not to believe everything you’re told; question it, and be sceptical.

Turner’s angst-fuelled ‘1933’ manifests itself as a punk rock anthem, laced with scepticism and highly memorable hooks. 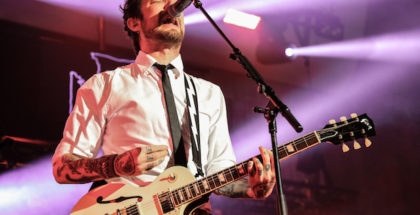