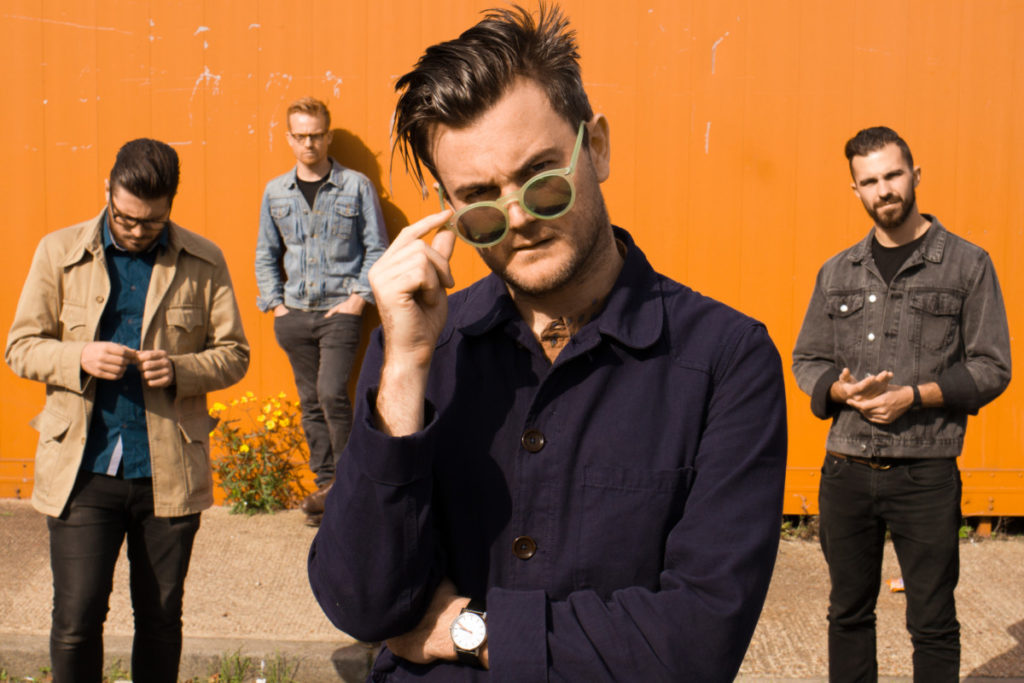 Escapists. We formed at the end of 2011 when I (Simon) moved to London in search for an output for my songwriting. Asking the only musical friend I had Oli Court (Guitar) if he knew anyone who could help me record songs led to a week’s recording session with Oli’s childhood friend Max Perryment (Bass/Keyboards). After hearing the result of these DIY sessions we decided to make it a full band thing by recruiting Max and Oli’s school friend Andy Walsh (Drums). Inspired by bands that Oli had shown me at University like Arcade Fire, The National, Deathcab for Cutie and Interpol; the four of us set about trying to write songs that emulated these bands but with an English vibe to them.

Bands like Arcade Fire taught me that music can be simple (‘Rebellion Lies’ is a three-note bass line) and if you strip back the complexity you can often get to the emotional core of the music quicker.
I wanted an outlet for my thoughts and songwriting was the perfect foil for an introspective slightly odd kid.

Our first single ‘Post Gospel Blues’ was backed heavily by John Kennedy at Xfm (RadioX) which lead us to live sessions and further radio exposure on Radio 1. We released our debut EP in mid 2012 which lead to a festival spot at Reading. 2012 included tour dates supporting Imagine Dragons. After this we retreated in 2013 to write and record our debut album. ‘Only Bodies’ was released in 2014 capturing our own brand dark pulsating indie rock. Singles ‘Breaking it Up’, ‘Blood’ and ‘Eyes’ were all playlisted on Xfm and received spot plays on BBC 6Music and Radio 1 and have been streamed almost 1 million times on Soundcloud cumulatively.

2014 saw sold-out headline shows at The Borderline, Hoxton Bar and Kitchen, the Garage, the Lexington, a headline slot at Elefest at the Coronet. The highlight of this run was support shows with the Manic Street Preachers. We continued to release singles until late 2015 where we once again took ourselves out of the picture to concentrate on new music.

Taking more of a concerted effort to take our time we spent all of 2016 and most of 2017 writing and recording a new record that was about pushing the boundaries of what a four piece indie band could do. Incorporating electronic textures and brass arrangements we came out the other side with a piece of work we are truly proud of

The sound has changed a bit over the years but we have kept the high energy of the early years going. Now there are more keyboard parts and interesting textures, even some samples used in a few tracks. The main thing that we have kept constant is an intense rhythm section and interplay between the bass and the drums and a euphoric quality to the vocals.

Best shows: Manic Street Preachers in Bournemouth and the tour we did with Imagine Dragons.
Our London shows have slowly become euphoric events with the best being the stripped back acoustic show (with a string quartet) at St Pancras Old Church.

Our songs are cinematic in scope with lyrics setting a mood and the music trying to convey the full emotional range through the dynamics. We use rhythm to create hooks in a way not a lot of other bands do.

It seems as though Spotify has done a great job recently of getting people who aren’t huge fans of music to pay for it again. And the vinyl resurgence has allowed for people who love music to have a great product again.

My fear with the playlist culture is that people just put on a playlist and have no idea what the music is. You see a lot of artists with huge streaming numbers and it’s probably inoffensive and bland enough to put on the ‘coffee and chill’ playlist…

LOVE Sigrid – its pop as hell but there’s something amazing about her gawky stage presence. Really loved the last Everything Everything record, a great mix of dance and rock. Fickle Friends, label mates YAWWN, The Horrors, Cymbals Eat Guitar, LCD Soundsystem, Manchester Orchestra, NO, FrancoBollo.

To play great shows and keep being inspired to write great music. If even one person comes to a show that is the biggest compliment anyone can pay you.

The Vaccines and The Horrors to co-headline new non-profit festival Chazzstock... 26 March 2012 | aaamusic