Bring Me The Horizon – Live @ All Points East

Much has been said of the corporate nature of All Points East, as well as the sound issues that hampered The Strokes the weekend before, but there is no denying that the organisation is topnotch. From the security and crowd control, to the food vendors and bars, All Points East is far superior to other London festivals. And if there had been sound problems in the past, then they had (more or less) been fixed for this, Bring Me The Horizon’s first ever festival headline performance.

Idles got things going on the main stage with their blend of traditional punk rock and indie-leaning post-rock, delivering a spirited performance to a gradually filling field. The blistering second half featured fan favourite ‘Love Song’ and hit single ‘Danny Nedelko’, as well as climatic closer ‘Rottweiler’, which built and built to a wall-of-noise crescendo.

Meanwhile, GIRLI offered an intimate dance-pop-rock masterclass over in at the JägerHaus stag, full of colour and attitude. ‘Up & Down’ and a fiery rendition of ‘Hot Mess’ were the highlights. Definitely one to watch.

Sheffield metalcore quintet While She Sleeps, over on the North Stage, looked like they were having the time of their lives as they got the first circle pits of the day moving. The sound was totally on point, with the group’s charismatic vocalist sounding excellent throughout. The riffs were heavy, the breakdowns were chunky and the setlist was as close to perfection as we were going to get with a relatively short set. ‘The Guilty Party’ and ‘Anti-Social’ were the choice cuts from their latest album, SO WHAT?, but it was ‘Four Walls’ from Brainwashed that got the most movement, before the thrilling double whammy of ‘Silence Speaks’ (featuring an appearance from the main man Oli Sykes, of course) and ‘Hurricane’ finished things off. Amazing.

Then came North Stage headliners, Architects, who smashed out one of the finest metalcore performances this reviewer has ever witnessed. Frontman Sam Carter totally owned the audience, constantly prowling from one side of the stage to other, while the band’s sound was consistently powerful. Half the set was built around their latest and greatest album, Holy Hell, which prompted most of the highlights, including the title track, ‘Hereafter’ and emotionally charged closer ‘Doomsday’. ‘Graverdigger’ and ‘Naysayer’ from 2014’s Love Forever // Lost Together were other highlights, both enhanced by massive blasts of fire (shout out to the pyrotechnic guys!). If Architects have been enjoying the best trajectory of their long and bumpy career, then this felt like the true crowning moment that will cement their status as the UK’s best metalcore band.

Time for the main event: festival headliners Bring Me The Horizon. And man, what a show. BMTH have been redefining what heavy metal is for some years now, and with their latest album Amo (which topped the UK official charts earlier this year) and this totally bonkers performance they have true become rock titans. In terms of the production and stage, this was not a metal show, it was barely even a rock show, but the dancers, flame throwers, consume changes and confetti only added to the colour and enjoyment of it all. Oli Sykes was his usual erratic self, flitting between psychotic deathhore growling, Chester Bennington-esque crooning and emotive whining; deranged metal head one second and cheesy pop heartthrob the next. It all sounds like it can’t possibly work, yet somehow you can’t help but love the man, love the band, and love all their ambition and hunger.

Despite encountering sound issues early on (i.e. way too quiet) with openers ‘MANTRA’ and ‘Avalanche’, slowly but surely the volume was increased and by the time Dani Filth had hit the stage for ‘Wonderful Life’, band and crowder both at full force. Naturally the bulk of the setlist consisted of tracks from their wildly popular last two records – including massive renditions of ‘Happy Song’ and ‘Mother Toungue’ – but the best moments came from further back in their catalogue. Earth-shattering versions ‘The Sadness Will Never End’ (featuring Sam Carter from Architects), ‘Diamonds Aren’t Forever’ and ‘Pray For Plagues’ appeased the oldschool fans, while ‘It Never Ends’, ‘Shadow Moses’ and ‘Antivist’ (featuring Lotus Eater) brought the biggest chants and pits.

The visuals were next level and unlike anything I’ve seen at a hard rock / metal show, with lasers, strobe lights, pyro and videos hypnotising the thousands of attendees for the duration of the show.  Of course, the biggest sing-a-longs were saved for ‘Throne’ and ‘Drown’ from the encore. A fitting end to one of the UK’s biggest and, yes, best rock bands. Where do they got from here?

AAA Music Approved: After the Calm

Architects, While She Sleeps & More Added To Bring Me The Horizon APE Festi... 12 February 2019 | aaamusic 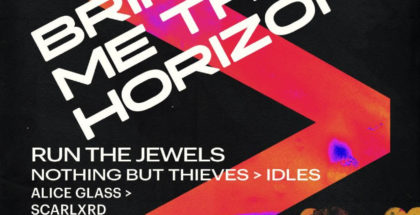